As we watch the historic General Election Major Party presidential run of the first African American in United History, another milestone was commemorated in the valley surrounded by the great Rocky Mountains in  Salt Lake City.

On June 9, 1978 , The Church of Jesus Christ of Latter Day Saints with music and prayer marked the historic event in their Church history, wherein male members of African descent were officially granted the right to hold priesthood offices in the church. 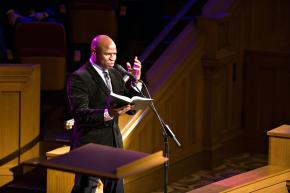 Viewed, 30 years ago, as long overdue by post civil rights America, the general society welcomed the news that the institutionalized racist policy was suspended. The vast majority of Latter Day Saints ( Mormons) welcomed it as living revelation solidifying their faith.  Many also were relieved that they did not have to live with such an uncomfortable tenet anymore. This was one of the final barriers that fell that allowed the Church to mainstream even more into the American religious landscape.

For the faithful members of the church, including those of African ancestry,  this change in priesthood policy  was a renewal of faith. Their commemoration is a celebration of God’s wisdom and hand in all things.

By Carrie A. Moore
Deseret News

Though they may not fully understand the reasons for the LDS Church‘s one-time ban on priesthood for black males, three black leaders of The Church of Jesus Christ of Latter-day Saints called for a spirit of unity amid the growing diversity within the church on Sunday as they joined thousands in celebration at the Tabernacle.

Held in the Tabernacle on Temple Square, the first church-sponsored commemoration of the 30th anniversary of the faith’s announcement extending its priesthood to “all worthy males” on June 8, 1978, drew more than 2,500 to hear words of encouragement, both spoken and sung.

Fred A. Parker, president of the Atlanta Stake, said during his “short tenure in the gospel, I’ve been asked time and again” by media, church members, investigators, friends and family members about the reason for the priesthood ban for black males for nearly a century and a half before 1978.

He said he is “very clear in answer to this unsettled question” that he is “grounded in my testimony of the gospel of Jesus Christ” and that “Heavenly Father knows best. I may not have a satisfying explanation,” he said, quoting a Book of Mormon prophet who said God created all things, and that “he has all wisdom and all power, both in heaven and in earth.”

“I don’t feel it’s necessary for me to understand all the Lord’s dealings to believe that he is God and that he loves all his children … I know that he can make us happy. We can’t understand all his thoughts, and my faith isn’t limited by things I don’t understand. … The power and ordinances of priesthood are real, majestic and compelling.”

Parker issued a personal invitation to “every nation, kindred, tongue and people to explore the true gospel of Jesus Christ. Find out for yourselves and act on the promptings of the holy spirit.” He said he’s often reminded that “to everything there is a season and a time to every purpose under the heaven. Our time is now and our Heavenly Father knows best.”

Catherine Stokes, a longtime church member and former administrator with the Illinois Department of Public Health, said she has a hard time measuring “institutional progress” in the church since 1978, but there are many personal stories of bridge-building between people of different races and love within the LDS Church. She quoted one friend who has seen “extraordinary progress since 1978,” sharing memories about “wonderful experiences observing and experiencing the interracial interactions the church provided” in one Chicago ward. “I learned a lot about myself and the absolute power of Christ-like love.”

Stokes said she can’t personally count the people “who have blessed my life. I’ve been absorbed into precious families,” with invitations to temple marriages, baby blessings, funerals, family events and everyday meals from her LDS friends. “We’ve shared joys and sorrows. I came into the church based on its teachings and the degree of correlation with those teaching and actions of most members.” She said she’s been “blessed to observe righteous priesthood holders … the persuasion, long-suffering, gentleness, meekness and love unfeigned,” spoken of in LDS scripture.

“As I observe what the church does … I know I am in the right place. Indeed, this is the place.”

Even so, she said, there are those who still reject the revelation allowing priesthood for all worthy males. For those “who prefer to hold on to the teachings of the past,” she quoted Elder Bruce R. McConkie, who told students at BYU following the 1978 announcement, “it’s time for disbelieving people to get in line and believe in a living prophet.”

She urged all of those assembled to “reach out to those with a lack of understanding about this matter … that we might help them come unto Christ and by so doing, help ourselves to come unto Christ. Since our coming to this land in chains, I believe it was the blessing of forgiving that enabled us to survive. Today we’re capable of even more — of loving those who do not love us.” “Do we have a ways to go? Yes — a very long way to go. But we’re raising a generation so much less color-conscious than the last one. … I have great hope for the future.”

Ahmad Corbitt, president of the New Jersey Cherry Hill Stake, said he admires “the stalwart black pioneers who valiantly bore testimony of the Savior and his gospel without benefit of priesthood” before the announcement that then-church President Spencer W. Kimball had received a revelation lifting the ban.

“We as Latter-day Saints who are black must assure our primary focus is on the saving doctrines and practices of the gospel, especially the Atonement.” He urged those in the audience to “increase the teaching of children that they are literal spirit sons and daughters of a kind Father in Heaven who loves them beyond our ability to express.”

He asked them to teach all young people to “come to Christ faithfully and apply the atonement diligently” as the foundation of “what will most help them. We must increase our own focus on these things, embracing weightier matters of the gospel.”

Teaching unity among all of God’s children is also critical, he said. “The more unified as brothers and sisters our children feel with other races and ethnicities, the broader their service will be.” Told by a patriarch before his LDS mission that he would become “a teacher in the church among your people,” he was convinced he would be asked to serve in some inner-city area, like the one in which he was raised. But his mission call was to Latin America, speaking Spanish. Yet, “when I left my mission, I did so in tears. My people had become Latino. Hispanics were and are my people.”

Similarly, he’s found that whites, Tongans, Hawaiians, Samoans, Polynesians, Asians and those of other ethnicities are also “my people. We share common thoughts and deep spiritual connections.” He lauded the growing role that “our children, grandchildren and great grandchildren” will play not only in preparing for “the return of our Savior,” but in perpetuating unity within the church.

“Some questions are difficult for us to fully comprehend, but focusing on his eternal plan we of all colors will walk through celestial gates and return to the glory only (Christ) can offer. May we help lead to that legacy. … Unity is a tell-tale sign not only of the true church, but of the Lord himself and his atoning sacrifice.

“Our oneness as a people is a manifestation to the world of the Lord’s power to reconcile us not only to God but to each other. This he does through the great Atonement, without regard to borders, barriers or ethnicity. This universal unity and joy are the destiny of the church.”

Elder Sheldon F. Child, of the Quorums of the Seventy, shared some of his experiences in New York City while serving as a mission president, and others while living in West Africa, where he witnessed the growth of the church among black members firsthand.

“There are no strangers or foreigners among those who enjoy the blessing of the priesthood, make sacred covenants and keep them. They belong to the household of God. Because of God’s love for all his children, in every gospel dispensation he has placed prophets on the earth to communicate his will to them. His love and his will was made manifest to us on June 8, 1978. … We certainly have cause to rejoice and to celebrate. May we show our love to him by the way we live our lives and reach out to others with love.”

Elder Earl C. Tingey of the Presidency of the Seventy conducted the meeting and said, “We look to the day when all men and women of the Earth will be seen as God’s children.”

Soloist Alex Boye, a member of the Mormon Tabernacle Choir, sang two hymns, “How Great Thou Art” and “I Know That My Redeemer Lives,” and choir director Mack Wilberg led a multicultural choir of more than 300 in providing additional music for the service.

The event also included a short video presentation, “He Inviteth Us All,” featuring black Latter-day Saints voicing their memories and experiences within the church.

A small group of protesters gathered outside the grounds of Temple Square Sunday evening to advocate for the issuance of a formal apology and open recognition from the church for having prohibited black men from entering the priesthood.

Bill McKeever, the director of a group called Mormonism Research Ministry, was heading the happening, which he characterized as “an effort to distribute information” rather than a protest.

“We’re out here calling attention to some of the teachings of past Mormon leaders regarding why the ban was placed on those of African heritage and the priesthood,” McKeever said.

The revelation came as the Church was facing major expansion in the world as its missionary efforts increased; and consequently,  priesthood leadership was needed in many areas, where such a an antiquated policy was no longer practical.

However, no matter what viewpoint one has on the matter,  the Mormons like America have come a long way on racial issues. The influence of our African American citizens are far reaching from our pulpits to the White House. We are the better because of it. 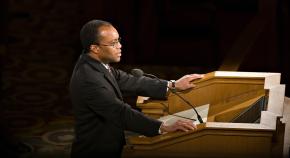 I keep thinking of Dr. Martin Luther King.     The dream keeps living on…