Stroke!:Guam’s Sean Pangelinan competes in his canoe single (C1) 1,000-meter race on Monday at the Beijing 2008 Olympic Games. He came in eighth place in his heat. (Gannett News Service)

After reading the article below from the Pacific Daily News, one of the great lessons from watching these Olympics in Beijing is that these games are not just about winning gold medals. There are lots of mistakes that are made turning a potential gold medal to a last place finish. 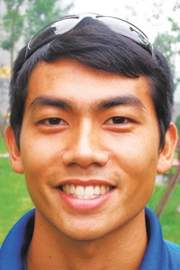 I am sure that even Michael Phelps has his share of stories. There are just not as much as of those kinds lately.  I mean probably very little. I mean like not at all.  Excuse me I digressed.

Guam’s Sean Pangelinan made a couple of mistakes that brought him 10 seconds out of qualifying for the next round of competition in the flat water canoe paddling event. Like a true Olympian, he has already reviewed them and has learned from them, and now is set to compete in the 500 meter race.

Now that is the lesson for all of us. A true champion learns from his mistakes. Now that is a winner. That is who Sean Pangelinan is to me and to others who continue to wish him success!

BEIJING— Sean Pangelinan was less than 10 seconds away from making history for Guam at the Olympics yesterday.

Paddling in the 1-man canoe, 1,000-meter flatwater event, Pangelinan had a bad start and never found his groove. He missed a chance to beat someone and advance, which would have been a first for Guam in any sport.

“I was not focused, straight up,” he said. “The one thing I knew I had to do was stay focused, stay calm, stay relaxed. But I wasn’t. I was too excited man, I wanted to spin my wheels, I wanted to give everything I got out there and as a consequence, I really didn’t do what I wanted to do.”
He also never knew he had a chance. At the World Championships, he said, only the top three advanced to future heats. Here at the Olympics, the winner of each heat goes straight to the finals while those who place 2nd through 7th face off in semifinals.
Pangelinan’s heat was the only one who had eight racers. The following heats had just seven, so everyone advanced.
Luis Pacavira of Angolafinished seventh in Pangelinan’s heat, finishing at 4 minutes and 39.538 seconds. Pangelinan finished at 4:49.284. The heat winner, Attila Vajda of Hungary, finished at 3:55.319.
It was bad for Pangelinan from the start. He forgot his accreditation badge, so he had to rush to get it and return to the starting line. He also spent plenty of energy getting to the line in a hurry, so he was already nervous and tense before the starting gun.
He had a bad start and fell behind immediately. At the 250-meter mark, he was two seconds behind the Angolan and 10 seconds behind the leader.
At the 500-meter mark, he clocked a 2:20.26, 11 seconds off his personal best for that distance. His finish time was 20 seconds slower than his prior best.
“Instead of using the water I tried to power against it. So every time I tried to move forward, I was apparently going side by side, only because the waves out there,” he said. “I wasn’t using it to my advantage. And so as far as that race goes, oh man. Definitely a lesson learned.”
Pangelinan, who trained along with Pacavira in Romania just before the Olympics, knew him well but said it wouldn’t have mattered if he knew he had a chance to advance.
“I don’t think that even if I did know that, it would have made a difference because I let the outside forces beat me,” he said.
Pacavira capsized his boat after the finish, happy to make the second round.
“I was excited to race him. We went to the boot camp together, we did the whole nine yards, and we raced in the end,” Pangelinan said. “It was a ‘too close to call’ kind of thing and I was looking forward to it. But massive props to him. He got the bragging rights. This time.”
The Olympics are not over for Pangelinan. He paddles in the 500-meter flatwater event today and is in a heat with only seven racers, so he automatically advances to the semifinals on Thursday.
His coach, Sandra Low, said she looks forward to his performance and he will fare much better in the 500.
“I think he just needs to relax and reach,” she said. “A lot of times in his case when he’s not reaching, I think he’s just a little nervous and I could see it. And I was trying to yell at him but he didn’t hear me! Because once you start reaching, it kind of calms you. That happens with outrigger, once you get flustered, you think back on the technique. I think this was a good warm up for him for the 500 and we’re ready.”
Pangelinan confident
“It was a lesson learned and I know that tomorrow, I know I’m not gonna make that same mistake,” he said. “From past races, I know that my first race is definitely not my strongest race, it’s always the one that shakes off all the jitters, all the nerves, and definitely makes me realize that dude, you’re here. Here’s your chance and don’t make that same mistake again.

3 thoughts on “Paddling for the Olympic Dream -Sean Pangelinan”