Legends of Guam – A View into the Heart of a Culture 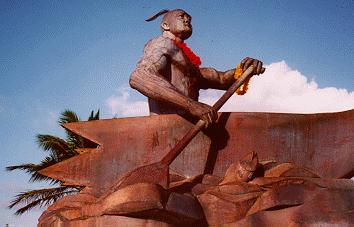 There are many legends from the island of Guam. I remember being told many of them growing up. Guam’s culture and language has been passed down through the generations orally through stories.  These stories have been integral to that process and I will say even essential. It taught me a lot about my native Chamorro heritage and instilled in me a pride in that heritage.

I am sharing one of them with you below I found on the web site: Legends of Guam( http://ns.gov.gu/legends.html)

Lend me your ears, young friends.
And a tale to you I’ll relate,
Of two strong Chiefs born in Guam
Who could crush an iron cage
And demolish the largest tree
If they happen to be in a rage.
One chief was called Malaguana,
The ruler of Tumon Town,
‘Twas then a flourishing village
And Malaguana was most renowned.
A man he was of great strength,
And his skin was healthy brown.
The other was Gadao of Inarajan,
A handsome chief was he,
Skilled in all sorts of acrobatic feats,
And a ruler of that community,
And oh, how strong was he
With arms so sinewy.
Then heard Malaguana of Tumon
That a man as strong as he
Was living at Inarajan,
And he ruled that land and sea.
So he resolved to fight with him
A battle strange to you and me.
In the evening he left his town
To fight his rival in strength
And reached far off Inarajan
As it neared the hour of ten
He found Gadao cooking fanihi,
But did not know him then.
Then out spoke Malaguana of Tumon
In a tone peremptory and free
“Where is your great strong chief
Who wishes to fight with me?
I’ll give him a battle today
And his blood will redden the sea.”
Then Gadao of Inarajan replied
Without vestige of intrepedity,
“Go, friend, fetch me a coconut
And then eat fanihi with me.
I’ll take you to our magnanimous chief,
But first go — there is the tree.”
Then Malaguana reluctantly,
To the tree directly went
And shook the tree so hard
that the nuts fell down like rain.
But noble Gadao was intimidated not,
His arms were like iron bands.
He took the hardy coconut
And pulverized it with one hand,
And meat and shell and husk
Fell down like grains of sand.
The Tumon chief was disgruntled
To see this gallant man
Take the hardy coconut
And pulverize it with one hand.
“Surely,” thought he, “his great chief
Must be a stronger man.”
“I’ll not fight him today, friend,”
Malaguana said, “Will you
Please take me home again
In your long and swift canoe?”
The Inarajan Chief was victorious,
But his words were very few.
So they went to the canoe
Which lay in the deep blue bay.
And they quickly seized their paddles
To start without delay.
But the battle was not yet over,
Listen folks, to what I say.
The Inarajan Chief was to steer the boat,
The way he very well knew,
But they paddled in opposite directions
And broke the canoe in two.
Now, good friends, are you not amazed?
I haven’t that strength, have you?
So dastard Malaguana reached his home
Ere the sun began to rise
Alone he was in a half-canoe
Much to his great surprise
We cannot compare our strength with theirs
For they were like unto stalwart bears,
Diligently working, the imperturbable chief
Was to be seen that very next day.
He was writing it on a solid rock
At his home in a cave by the bay
He was inditing the trial of strength he’d had
And had won without delay.
And folks who go to Inarajan
As pilgrims on Patrosinio Day
May see the writing of this great chief
In a cave by the deep, blue bay.
It tells of the great battle
That noble Gadao had won that day.
—–Judge Francisco Lujan———
Author of the Legend of Chief Gadao