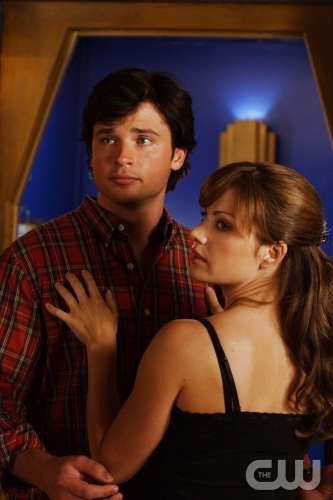 Smallville started its 8th season with Clark Kent (played by Tom Welling) losing all his super powers and Lex Luthor missing.  A new seemingly more menacing figure has taken over Luthor Corp and her name is Tess (played by Cassidy Freeman).

Chloe (played by Allison Mack) and Jimmy (played by Aaron Ashmore)   are back.   The Justice League is again featured in this episode and has always been a favorite of the audience.  Smallville takes the Superman lore and builds a slightly different take on the story while still keeping pace with the heart of it. At its core, it is still about a young man struggling to grow up and finding his purpose. This season is pivotal in that it is a turning point for Clark.

The episode literally has Clark die and then comes back to life again. There is a lot of biblical symbolism in that he is brought back to life by being brought closer to the Sun which resurrects Clark. Superman gains his strength from Earth’s yellow sun.

He also finally lands the job at the Daily Planet in a desk opposite Lois Lane (played by Erica Durance). With Lana not in the picture, the Clark/Lois saga should get into full gear this season.

Smallville continues to be fresh as it builds on an old classic. It airs every Thursday at 8:00 p.m. on the CW.