Sean Penn won the Best Actor Oscar for his portrayal of the first gay publicly elected official Harvey Milk in the movie “Milk.”   In his acceptance speech, noting the signs of hatred that greeted Oscar participants on the way to the event, Penn said, “For those who saw the signs of hatred as our cars drove in tonight, I think it’s a good time for those who voted for the ban against gay marriage to sit and reflect on their great shame and their shame in their grandchildren’s eyes if they continue that support. We’ve got to have equal rights for everyone.” 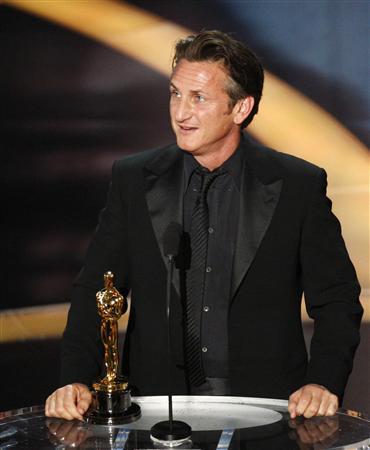 Sean Penn accepts his Oscar for best actor for his role in "Milk" during the 81st Academy Awards in Hollywood, California February 22, 2009. REUTERS/Gary Hershorn

Earlier in the evening, Dustin Lance Black, who won best original screenplay for “Milk,” also spoke about gay rights by stating, “”I think [Milk] would want me to say to all the gay and lesbian kids out there tonight … that you are beautiful, wonderful creatures of value, and that no matter what anyone tells you, God does love you and that very soon, I promise you, you will have equal rights, federally, across this great nation of ours.”

These wins on Oscar night were especially poignant in the historic Castro Theatre in San Francisco were hundreds attended a fundraiser that included a live broadcast of the Academy Awards. Thunderous applause went up with Penn’s win. Many who worked Milk were in attendance at the fundraiser.