more about “The Passion of Sister Dottie S. Dixon“, posted with vodpod

One of the funniest and most LGBT activists comes from a little town in Utah called Spanish Fork. Yep, right in the heart of conservative Mormonism. Comedian Actor Charles Frost whose alter ego Sister Dottie Dixon comments regularly on local radio and on a blog called: Sister Dottie’s Blog.

Frost’s wit is sharp and conveys a dead on understanding of Utah Mormon culture so his lampooning of it is perfectly orchestrated. It is the kind of humor that brings truth glaringly front and center. 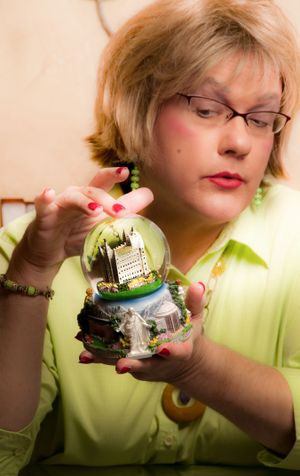 Frost is now part of a production called the Passion of Sister Dottie S. Dixon that will play on stage in May in Utah. Here is a synopsis from the Gay Mormon website: Affirmation.

“The Passion of Sister Dottie S. Dixon” to Be Staged in Salt Lake City

A gay-friendly show that promises to include references to the GLBT community, Proposition 8, and Utah’s predominant religion, The Passion of Sister Dottie S. Dixon will soon be staged in Salt Lake City. The writers, Troy Williams and Charles Frost, are two gay men, both of whom come from an LDS background. The director, Laurie Mecham, is well known to Affirmation members because of her impersonations of Sister Fonda AlaMode and Mrs. Cherry Jubilee.

Sister Dottie is none other than Frost, best known in the GLBT community for the dramatic role he played as a Mormon father who loses his son to suicide, in Carolyn Pearson’s Facing East. “Dottie’s sort of a manifestation of my mother, who is no longer living, and some of her friends,” Frost told JoSelle Vanderhooft of QSaltLake. “I channel her frequently [when performing as Sister Dottie].”

“I see The Passion very much as activism,” Williams wrote in his blog. “On one level, it’s a response to the ongoing battle between Mormons and Gays. On another, it’s our intention to transcend polemics and actually move the audience into a different space… Can we explore conflict through humor and joy? Can we include the old narratives while transcending into something new? That’s the goal.”