Angels, Demons, The Piranhna, and the Gypsy- Our Vegas Trip

I cannot believe it was just a week ago that the three amigos, Jeff, Chris and I were in Las Vegas. We had been planning that trip for a while and it turned out to be a very fun three days for us for many reasons.

When we flew in on Friday, we were energized by the sound of slot machines reverberating throughout the airport.  After picking up Chris’s scarlet red (how appropriate) duffel bag at baggage claim, we caught a cab to the Las Vegas Hilton where we were staying.  The first thing I noticed was how fast we caught a cab.  For a weekend, I can immediately see that the economic downturn has had an effect on Vegas. There were not as large crowds for a weekend. We will find out soon how easy it was going to be  to get around town and into venues.

The Star Trek Experience is no longer at the Hilton. That means more cool people stay there and you do not see as many nerds. However, this week we saw more families since it was also Mother’s Day weekend.

We each got our own Queen Suites (I know… how appropriate). Our rooms were located on different floors one on top of each other. Chris was on the 13th, Jeff on the 14th and I was on the 15th. 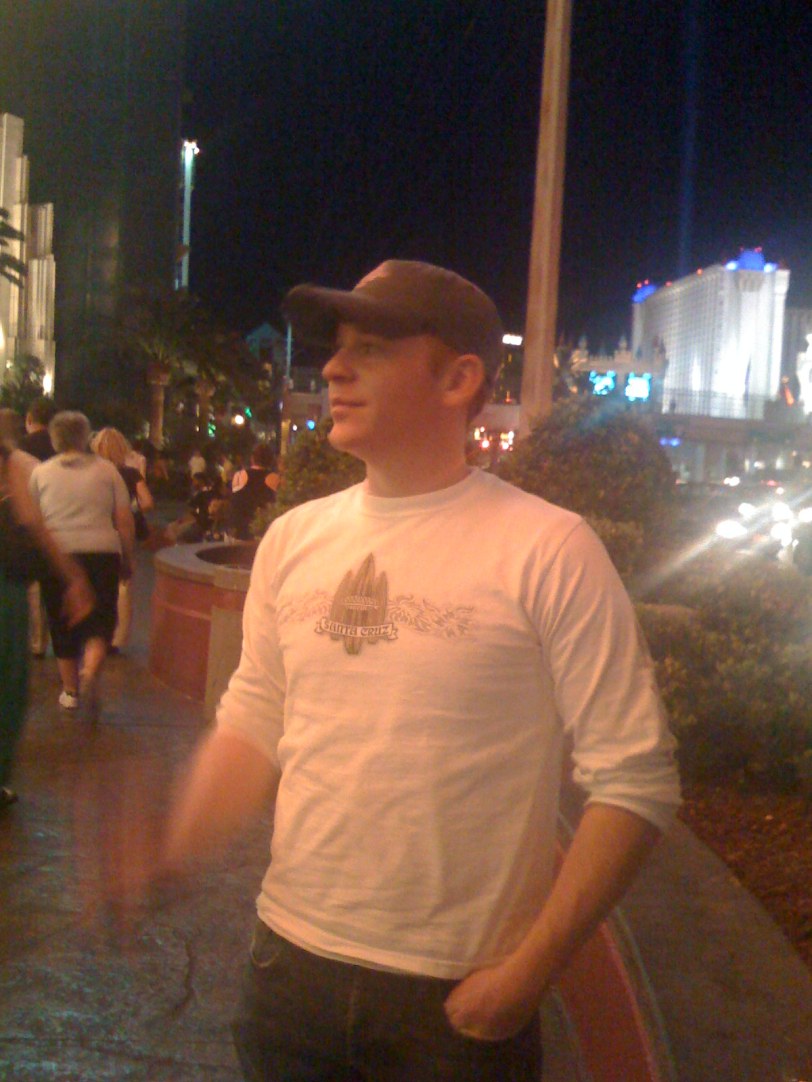 Chris on the Strip ( Photo by Tasithoughts)

After getting ready and grabbing a quick meal, we then headed out to the gay district affectionately known as the fruit loop. It is located on Paradise Road off the strip. This area has special significance to me since this was where I went to my first gay bar when I came out years ago and here’s where I had a lot of firsts.   However, that is another story.

We went to Gypsy’s but nothing was happening there. We decided to go to Piranhna (the old Angles bar). Now, there was a lot more activity and we had some drinks. It was a good crowd with a lot of eye candy.  It was a good first night in Vegas.

Jeff and Chris wanted to leave to go back to the hotel. I decided to stay longer and quickly ran across the street (they would describe it differently) to another bar called Buffalo.  I walked into couples land.  There were all these gay couples in there. It was such a sweet scene, so that means that I lasted about five minutes there.

The Strip ( photo by Tasithoughts)

By the time I return to Piranhna, Jeff and Chris had already grabbed a Taxi home. Both had texted me on my iPhone to make sure I was alright. More people came into the bar and I met some nice guys and had a great time. There was this really nice guy named Nate from San Diego who was up from college who talked to me. Great conversation.  I finally went back to the hotel and hit the sack.

On Saturday morning, Chris and I got some breakfast at the buffet. We ate some scrambled eggs there.  They tasted like you wanted to heave them up immediately so we had omelets made for us. No more of that awful buffet for us!

We hung around for most of the day at the hotel and by the pool. Now you would think the pool would be sexier but it was like hanging around a  Disney Family Cruise.  Mother’s Day weekend…you gotta love it!

Another thing we  had to adjust to, well especially for Chris, was that we were not in the gay Mecca of San Francisco anymore.  The gay to straight ratio is flipped. So if you cruise here you may get a bruise here.

Chris said it was kind of a chore trying to figure out who was gay or not. There were a couple of them in the casino.  One young guy totally did a total turnabout with Chris but they were not able to speak to each other.  One early morning, around 3:00 a.m. we got back and were getting a snack and Chris called out to a cute guy “Get Over Here!” flirtatiously.  Now the guy looked over and we did not know if the look was one of bemused acknowledgment or the kind that said “What the hell did you say?” We had to remember that we were in “Kansas” and not in “Emerald City”.

Jeff and his shades ( photo by tasithoughts)

Chris did some gambling and won and won and won.  He had a good winning streak the whole time we were there in Vegas. It was fun to watch. Nada for me. I put money in and nothing came back.

We decided to go to the Forum shops at Caesar’s where we eventually  ate at Spagos. That was nice. We then walked the strip. We watched the fountain show at the Bellagio. The crowds were there but it was not too bad. Jeff decided that he did not want to go clubbing so he went back to the hotel.

Chris and I went to Krave, the gay nightclub right on the strip next to the Planet Hollywood Hotel.  They had a theme, Angels and Demons.  I guess after the movie that will be released this month. This turned out to be my favorite club.  Soon after we arrived, Chris decided to go back to the hotel as he was tired. So here I was alone again and not tired at all.  I was in Vegas and determined to enjoy every minute of it.

A Living Statue at the Venetian ( photo by tasithoughts)

I met a bunch of guys from San Francisco who rented one of the booths there. They were nice and they had travel to Vegas to celebrate their friend’s birthday. I had seen a couple of them at club called Trigger in San Francisco.

Soon after while I was standing there, this guy named Michael said Hi to me.  He was so funny and very outgoing. He was from Vegas and he was there with a bunch of friends who were celebrating one of their own receiving his master’s degree.  Michael seemed like he knew everybody in the club and introduced me to them. He even knew the dancers. Before we knew it, I was dancing with this group of people on the floor. The music in Krave was great and it was fun just getting lost in it.

The Angel and Demon dancers (both men and women) did some Cirque de Soleil kind of choreography. It was really cool.  We got one of them to crack up laughing by making faces at him.

Michael and crew had to leave.  Then I got asked to dance by this guy named Gregory. He was some sort of paranormal psychic. Whatever. He could dance and I had fun. I finally made it back to the hotel and caught some zzzz.

On Sunday, we laid out by the pool and lazed around during the day. Then we went to dinner at this great Mexican restaurant called Lindo Michoacan.  However, the cab ride there was a doozy. Our cab driver was like Mr.Magoo.  He drove like he was inches of running into something. He did not know where he was going. He kept asking us how to get to the restaurant!  I even looked up the address on my GPS on my iPhone. The damn thing  had a glitch because it put us on a parallel road and not on the right one.  Jeff, Chris, and I thought we were in some sort of reality show that was being taped.This man was like Miss Daisy, but he was driving!

We finally made it to the restaurant.

We were served immediately and had the BEST food of the entire time we were there. We recommend this restaurant to anyone visiting Vegas.  Since it was Mother’s Day it was packed with families, but it was such a pleasant dining experience.  The Latino element also brought the good looking factor up a few notches. I had to laugh because the wait staff thought I was Latino, and they kept deferring to me as if I were hosting my two white guests at the table.  That was a great meal.

Later on the evening, we headed back to the fruit loop and ventured to a little dive karaoke bar called the Free Zone. Let’s say it did not look like that place was renovated since the early seventies.  There were some women in there that looked like they were just released from prison and wanted you to be their bitches.

Jeff and I were asked by this young guy named Aidan and his friend to play pool.  Pool?!?  My Gary would laugh.  I don’t really enjoy pool. However, Aidan was interested in Jeff so I can play anchor for that purpose.  Okay between both teams we were all sorry ass players when it comes to playing pool. Chris came in to play for a few rounds to fill in for Jeff at times.

Then Chris and I left to go to Gypsy’s so Jeff could get to know his new admirer better.  Gypsy’s had a drag show that night and it was packed. Jeff soon joined us and we found out that he was not interested in Aidan that way.  However, Aidan and his friend followed him to Gypsy’s. The show at Gypsy’s was great.  It was one of the best drag shows I have ever seen. I remember years ago Madonna making a surprise visit to that stage.

Gypsy’s turned out to be a great night for meeting some nice people for all of us.  It was a great way to end our last evening in Las Vegas.

Monday morning came rolling around and then at noon we checked out. We had our bags stored in the hotel while we did one more round of the strip before we headed out to the airport. We went to the Venetian where we caught lunch and sat on a street side café in one of their interior city lots next to an internal canal as gondolas passed by with lovers enjoying  romantic moments.  Jesters and Opera singers put on a show.  We took in this last essence of Vegas.

Boarding the plane that afternoon, I thought the most important part of this trip is that I got to know more about my friends Chris and Jeff. Chris is literally my best friend and I was able to talk to him more about stuff we normally do not get to chat about in our regular life here. He really is a cool guy and I found out we travel well together.  Jeff is one of the sweetest guys I know. He is well traveled, intelligent and cultured. He also has that right amount of mischievousness in him.

I cannot wait for the next trip.

Is there more to this Vegas trip? Probably.  Is it because of what happens in Vegas stays in Vegas?  Perhaps.  However, I think it is more what you cannot remember from Vegas that stays in Vegas.  Damn those Long Island Teas!

2 thoughts on “Angels, Demons, The Piranhna, and the Gypsy- Our Vegas Trip”