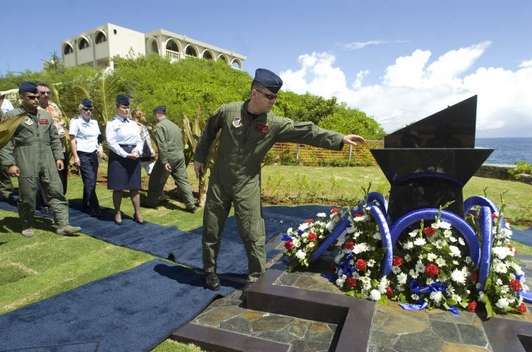 This is my first time back on Guam for Liberation Day Festivities in 18 years.  It was 65 years ago that the people of Guam were freed by U.S. military forces after a brutal occupation of over two years by the Japanese during World War II.  The event is celebrated with somber memorials and patriotic celebrations including a big parade – Guam style.

Last year, on Liberation Day, six airmen perished when their B-52  with the call sign Raider 21 crashed off the coast of Guam. They were flying around the island as part of the Liberation Day festivities. 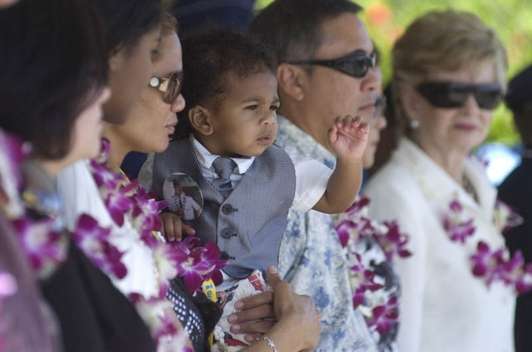 Raider 21 memorial ceremony Masako Watanabe/Pacific Daily News Family members of six Airmen flying the B-52 that crashed July 21, 2008, and officials stand as the color guard posts colors during an unveiling ceremony for a memorial monument for the crew at Adelup on July 20.

During the commemoration, four Air Force F-22 Raptors and a B-52 Stratofortress did a fly over in honor of the men. 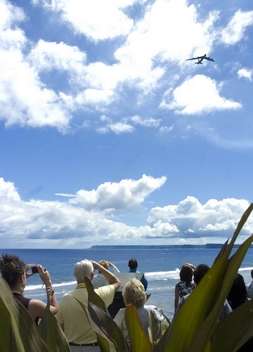 The Leddy and Arce families attended since Reina Leddy was instrumental in spearheading the construction of the memorial. I have included video clips below. David Leddy, her husband, laid a wreath in her memory.

AAFB 36th Wing Commander and Joint Region Marianas Vice Commander, Brig. Gen. Philip Ruhlman, expressed appreciation to the government of Guam, the Guam Chamber of Commerce and others who endeavored so tirelessly to make the memorial event a reality.

“No words that we speak nor plaques or memorials that we dedicate will ever fully be capable of describing or defining what Raider 21 meant to anyone who knew them, knows them or still love them and for those of us who never had the honor of meeting these men, we come here today to see only a part of what they were and it is worthy of our praise in honoring them,” he said.

He especially gave thanks to late the Chamber president, Reina Leddy, who had proposed the memorial for the ill-fated crew.

The memorial is comprised of a latte stone made of black marble with the names of the crew members inscribed on it. The Air Force will also do a “missing man” formation in a flyby with B-52s on Liberation Day today.

After Ruhlman spoke to the somber gathering, the families were escorted to the memorial, accompanied by Gov. Felix Camacho, Congresswoman Madeleine Bordallo, and Joey Crisostomo, chairman of the Chambers Armed Forces Committee.

“As a people and culture who value family above all else, the Guamanian family knows and understands the sorrow and the pain of your loss,” Bordallo told the families of Raider 21 crewmen, “but know that every time this monument is visited especially by those who understand its meaning and its purpose, there will be prayers and remembrances to those who know to whom it is dedicated.” 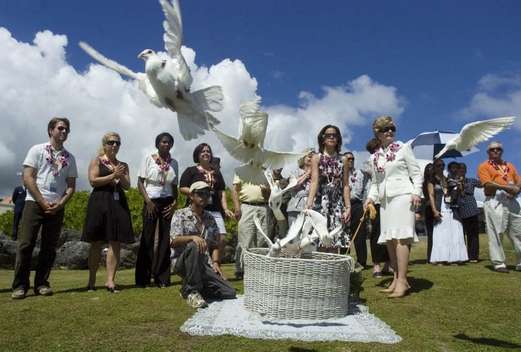