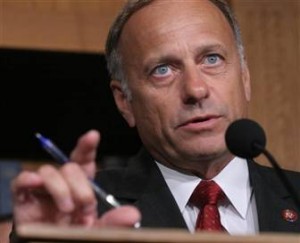 Using the age old argument against past  civil rights movement or quests for equality for groups in the United States of America, Representative Steven King– Republican from Iowa, takes the desperate pot shot of associating the quest for marriage equality with Socialism.

With the negative connotations that has been embedded in our country about Socialism, this is a tactic to appeal to that portion of the population of America that still gets alarmed by such stupid rhetoric. King is trying to organize a political lynch mob.

Of course, he brings out the fear factor by stretching the public’s imagination by stating if gay marriages were allowed, group marriages will be allowed, and that there will be a free for all.  However, I have yet to see a socialist model in practice where that has been allowed  that to happen.

Your claim that marriage equality is part of a socialist agenda…laughable!

Of course this is not about socialism, this is about democracy and our rights as Americans.  It is under this  government that we are seeking the right to be treated like everyone else.  It seems that it has been the agenda of the extreme religious right that has been fueling the likes of Mr. King, where theological interference in the affairs of government brings us back to the days of the middle ages…that actually fostered the very beginnings of the revolution that created this great democracy.

So what Mr. King actually wants is to reverse time back to a place where freedoms were squelched and ideas were limited to one point of view.

As an American, I say no, Mr. King, you are wrong.  You are simply reflecting your bigotry and it a shame that you are even in the halls of the great Congress of our country wasting our time with rhetoric that belongs back centuries ago in history.

The LGBT community will win this right because this is America where Equality wins because democracy works despite  despotic and bigoted opposition.