Siobhan Magnus,  took on a Rolling Stone number  ” Paint it Black” and added a theatrical component to it. The result was a performance to remember that was so far above the other top twelve contestants.  She brought it on like someone who was there to win the show.

Even favorites like Michael Lynche and Crystal Bowersox could not match the level that Magnus achieved last night. 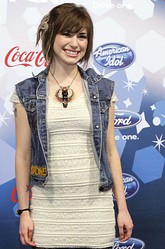 Express Night Out, Washington Post: Siobhan Magnus gave an “absolutely masterful performance. I had no idea anyone this season was capable of such a thing. It was like an Adam Lambert set from the days of yore.

The beginning, with its soft sounds and altered hook, are like opening a twisted music box, with Siobhan dressed perfectly as the dark ballerina in its center. But then, when the song lithely transitions into hard-charging rock, Siobhan blasts her voice into the stratosphere. It’s my favorite performance of the year, hands down. It’s black magic from start to finish.”