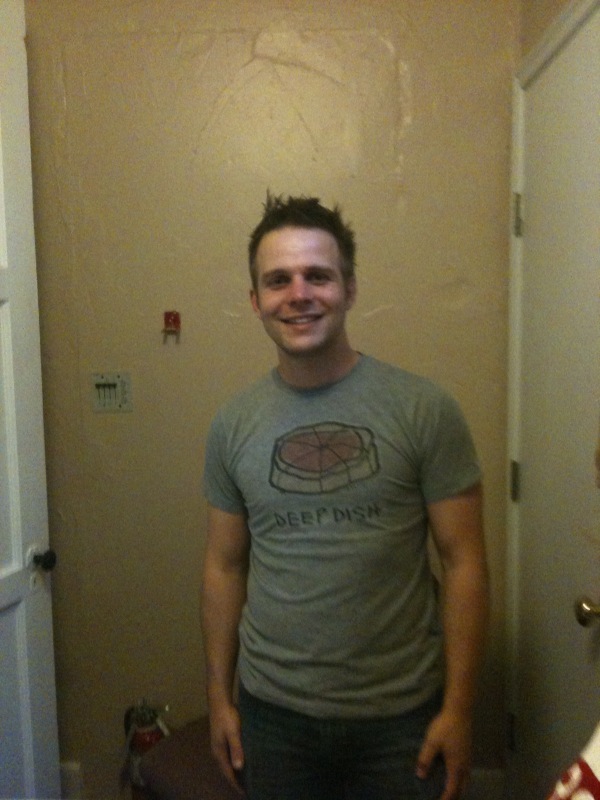 Tom Goss at the MCC in San Francisco, CA

I have followed Tom Goss for some time now and blogged about him.  We have become friends over time.  His music and his songwriting are some of the best that I have ever heard.  There is depth to his lyrics and when he performs them he puts all this energy into singing which literally takes over his small body frame.

When I arrived at the MCC in San Francisco, he was there at the reception desk helping with collecting tickets and entrance fees.  He recognized me and called me by name.  I met him through blogging when I first saw him perform on the Feast of Fun.

He performed last, but I am going to to write about him first.  Tom commands the stage when he performs. He immediately engaged us as an audience.  he sang one of my requested songs, Lover.  I always thought that this song needed to be a theme to a movie. It is so powerful and deserves national recognition and enjoyment.

He prefaced the song by saying that his long term partner, Mike, was able to visit him here in San Francisco while on a business trip to Sacramento.  He and Mike have this great love story and they plan to get married in the fall.

His performance of Lover,  Rise and  Back to Arkansas were all spot on and he was able to bring the audience to cheers and some emotional moments.  I also loved his rendition of “Til The End.”

He also performed the powerful song ” You Don’t Question Love.”  This reflects his growing activism in the Marriage Equality issue.  He recognized couples in the audience who were showcased in the video as a result of a campaign held for people to submit wedding video clips for the video.

He also told his coming out story out of a Catholic seminary.  He had to find a place in Washington D.C. and during this traumatic time,  he also ended up in a one night stand.  That inspired his song “Stay”  which he explained how he was fortunate to meet someone that night who was kind and who stayed by him through one of the worst nights of his life.  He said that he is forever grateful to that person.

He spoke to me about his forthcoming album. He is so excited about this next group of new songs. I cannot wait, Tom!

Jermiah Clark at the MCC in San Francisco

This was the first time I have seen Jeremiah Clark performed live.   Jeremiah is a poet songwriter whose use of words brings about images that make his songs memorable.   He and Tom have been touring for five weeks in “The Big Spring Tour.”  His songs surrounding love and loss were deeply moving to me. 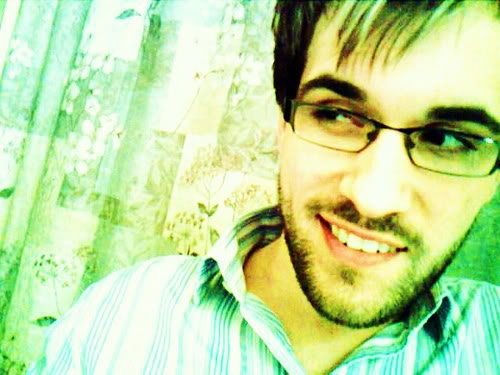 Dudley Saunders spoke to me before the concert and he mentioned to me that in the early years being an out musician was difficult and compared to the current climate.   His music is earthy and soul deep, punctuated by his unique vibrato masculine voice.  His artistry has been validated by his album , The Emergency Lane” winning the Best Album award at the 2009 OutMusic Awards.   His songs range from a “Love Song to Jeffrey Dahmer ” -not what you think- to a range of songs going back to folk country.   He has produced both edgy but deeply life descriptive
songs.

Jeremiah Clark at the MCC in San Francisco

Daniel Owens was the only San Francisco artist to perform among the four musicians. He has a great sense of humor. His songwriting is moving. He also debut a song of a musical that he is writing. It was a hymn and I found it to be truly touching. His instrumental skills on the piano and guitar are notable. His music ranges from ballads to rock medleys. 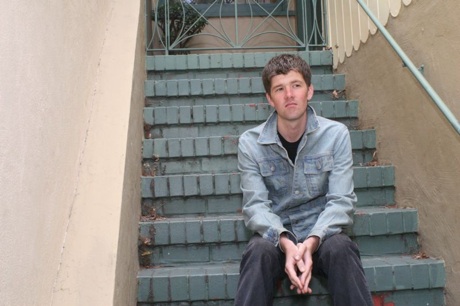 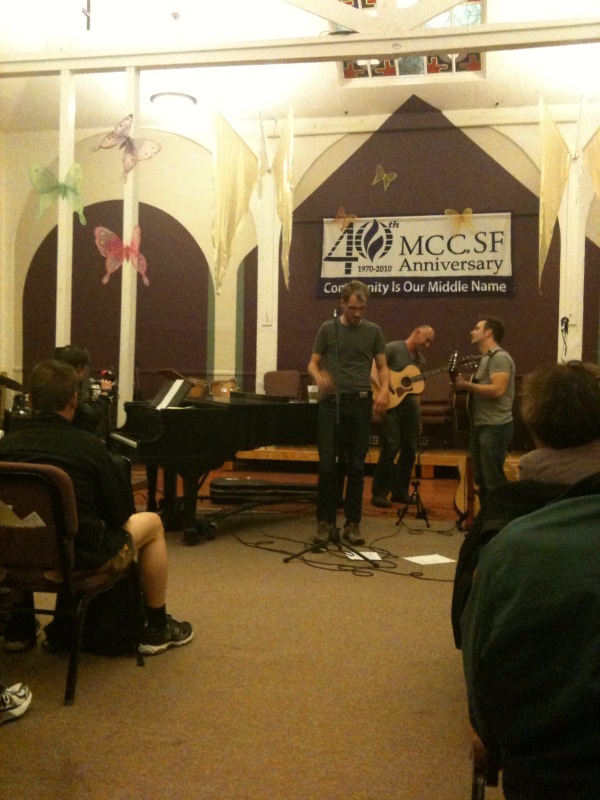 Daniel Owens, Jeremiah Clark, Tom Goss and Dudley Saunders perform in a group finale at the MCC in San Francisco

This was  truly an organic show with gifted out singers and songwriters.   Listen to their music and see a show if you can,  if any of these performers have a gig near you.  These are the artists of this generation who bring our message and voice to the world.