Gangster Squad – Great Movie ! Don’t Let It Slip You By 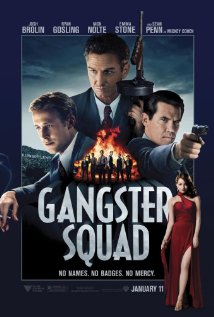 It is a throw back to that film noir like style of the forties and the old style of gangster movies but with a modern sensibility.  My friend Omar and I decided to see the film on a whim because some of the Oscar nominated films that we were hoping to see   did not have showings available when we arrived at the movie theater.

We heard about the Gangster Squad but really did not know too much about the film.  The first thing about the film, is its stellar cast: Sean Penn,  Josh Brolin, Ryan Gosling, Emma Stone, Nick Nolte and others.  The film uses classic narration and is filmed in such a way to give a nostalgic look to 1949 Los Angeles, where gangster, Mickey Cohen ( Sean Penn) is determined to make it his stronghold Chicago Mafia style.

The film follows a secret team of police officers who go underground vigilante style , under the law , while operating under the orders of the police chief to break up the gangster’s empire.  It is a harrowing , corrupt Los Angeles  that they risk their lives and families so they can  take this syndicate down.

It is an exciting film to watch and is an homage to gangster police films of the past.  Penn, Gosling and Brolin bring top rate performances. Penn is brilliant as the mobster boss and embodies his character wholly.  Brolin plays the leading man and bull headed straight cop to the tee.  He is forceful and superheroish in that way these characters always become even as flawed as they always are as people.  Gosling is the scene stealer and ,is again ,I believe, the greatest male actor of his generation.  I cannot wait to see him in more leading and challenging roles.

The movie has great acting, great action scenes and is one of the movies you love to see on the big screen.  If you have not seen it, do so, and make sure it does not slip you by.