Bates Motel: A Descent Into Madness

Bates Motel on the A&E Channel ended its season with the self realization by Norman Bates (Freddie Highmore)  that he has a dark, menacing side. It also left us with the growing uncomfortableness of watching the natural bond of mother and son cross boundaries as Norma Bates ( Vera Farmiga) and Norman co-dependency increases.

It is really more on the confused, emotional level that you see this lurid bond occurring more and not on the physical level. It adds to the creepiness of the situation and the descent into the murderous insanity of this TV prequel to Alfred Hitchcock’s classic movie, Psycho. 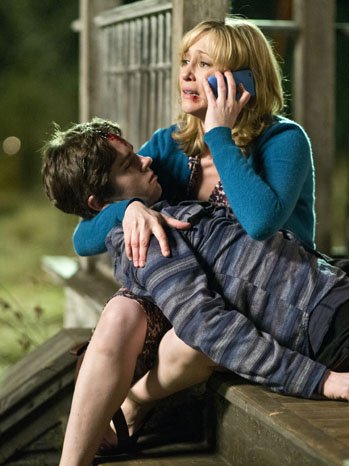 Vera Farmiga and Freddie Highmore in the Bates Motel

We already can see the personification of Norman’s developing sociopathic tendencies in the twisted image of his mother being the leading voice in his mind for his madness.

Big brother , Dylan Massett (Max Thieriot), caught up in his own illegal murderous marijuana drug business, finally makes a breakthrough with his mother, Norma, in the last episode of the season.  She acknowledges and apologizes for her distant aloofness to him ( a product of her continual incestuous rape by her brother in her youth). Norma expresses her love to Dylan and perhaps some healing has started. However Norman’s issues may strain all of that between them.

Max Thierot adds the hunk factor to the Bates Motel

Of course, supporting character regulars  Emma Decody ( Olivia Cooke) and Sheriff Alex Romero (Nestor Carbonell) also hold their own.   The whole cast is a great example of how to create an ensemble of madness personified in so many ways.

It is great TV!

Kudos to the writers for creating and maintaining this edgy drama and thriller.