Blue Is The Warmest Color – Mesmerizing, Intelligent, And Too Long 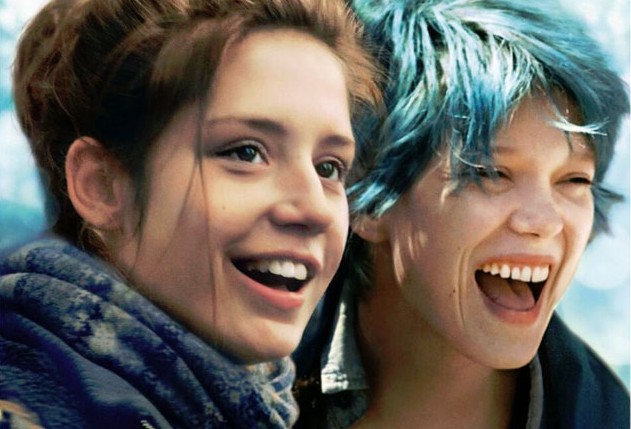 Adèle Exarchopoulos and Léa Seydoux in Blue is the Warmest Color

I love French films.  They are done with a rawness and honesty that does not come off insincere and fabricated on the big screen. Golden Globe Nominee for  Best Foreign Film, Blue Is the Warmest Color,  is an intelligent film that explores the sexual awakening and the associated issues surrounding a young girl and her journey into the emotional reality of adulthood.

The film is mesmerizing and draws you intimately into the world of the main character Adele (played adeptly by Adèle Exarchopoulos ) . There is a vulnerability to her performance as she deals with breaking through the peer imposition of who they believe she is and finding the courage to become that person.  However, her human frailty is transparent as she tries to cloak her sexual preference for women in lies.  It is a survival mechanism for her and it is more relevant as she tries to deny to herself what she really is feeling.  It is a dance between her struggle to be authentic and her own self acceptance.

The sexual scenes are intense and graphic,  but not exploitative.  In these intimate moments you capture within the sexual connection what kind of bond exists vividly between Adele and Emma. It is freeing as you watch them physically express their emotional link.  It resonates deeper than the hot passionate sex that is apparent. Perhaps that is the key to their passion.

What makes this film compelling is that as Adele opens up to her love interest, the very confident and sexual, Emma ( wonderfully played by Lea Seydoux), her sexuality is fluid at times as she sleeps with men also , especially, when she is going through some sort of confusion.  Her sexual range is not all in any one category,  but where she finds more comfort and full sexual expression is with women.

Her insecurities get the best of her and she is caught by Emma in her lies that she continues to tell when confronted with coming clean about her infidelity. Older, she finds that these lies are not  effective. She finally faces her loss, as the result of her mistake, and it sends her rudderless for a time.

The movie is filmed beautifully, with each scene capturing the exposure and vulnerability of each character. Their faces reveal all as they interact with each other. It makes Adele’s life a piece of art on canvas in the making.

The only downside to this film, is that it is about 30 minutes or more too long. I understand that with these kind of films , it is more about capturing moments in a person’s experience with no judgement. This film illuminates in its writing life’s experiences found in the commonality of daily routine. I love this in these kinds of films.

You could feel the antsiness of the movie audience as the film trailed on and on.  It was like we got the story and became empathetic with the characters and then we were drifting in some areas of the plot.  The ending was not a surprise and we were left with no real resolution ( another reason I love these types of films). However, the length of the film made it lose some of its luster.

It is a good film ( for adults only) so I would recommend giving it a watch ( despite  my opinion on how long it ran) when you have a three hour time slot. Bring treats and lots of caffeine.  Blue is the warmest color , and in this case , the longest three hours.