As the World Turns – Luke and Noah – Lovers Split Apart

The saga of the longest running gay love story line on a daytime soap had a dramatic twist this week. It was not “Luke and Laura” but ” Luke and Noah.” 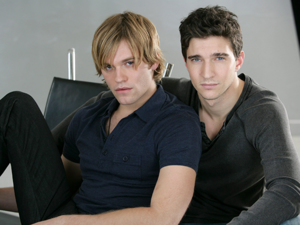 Luke is played by Van Hansis and Noah is played by Jake Silbermann. Their characters met back in May 2007.  Then there was this prolonged coming out story line filled with prerequisite high drama, filled in by the soap opera frozen pauses at the end of each scene while  haunting, longing music trail off into commercial breaks.

Oh yeah,  there was that girl named Maddie who was dating Luke. That was a mess.  Duh! Maddie!  You finally figured out he liked Boys. What did it take? A  whole season?

Well,  the guys accepted their rainbow membership and  declared their love  for each other.  Of course, it was also mixed in with some of the hottest gay love scenes on American daytime TV.

Like any good soap opera worth it’s salt, couples can only be happy for a minute.  Luke and Noah were no exception.

Pretty soon Noah had to marry Iraqi born Ameera to protect her from homeland security.  You know, typical gay guys helping their straight girlfriends out. Luke even moved in with them for a while. You know that was a disaster waiting to happen. It did . Imagine the fights just over  hair products in the morning.

There was hope.  A couple of days of ago through some miraculous fate of of ACLU magic, they found a way to solve Ameera’s international problem.  Apparently, ACLU has more power than any military counter intelligence unit on the planet. So  exits Ameera.

Was there now hope for Luke and Noah?   The clip shows trouble in queer coupledom.

Is this the end of Luke and Noah?  Will we see Hot Men make out again on daytime TV?  Will there be a big Gay TV Wedding in Callifornia that will be broadcast all over the world with big product endorsements?  Will they find out they really are brothers? – Ewww.    Will one of them be run over by a big truck only to be found alive 20 years from now?