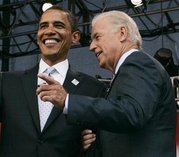 Despite some political pundits opinions in the current media, as a voter in America, Obama’s decision for a Vice President running mate was an important one for me. His announcement that he selected Joe Biden demonstrated to me that Obama was able to make a balance, well thought out decision.

Biden comes with years of experience in Washington and certainly brings to the ticket some strengths that can only augment the fresh change that Obama  has been advocating to make in the White House. Some pundits have said that Obama’s choice has shown a lack of confidence in his own abilities. I could not disagree more. His choice actually shows the opposite.

To make real changes, you need a place to change from and you also need to be smart on how to effectively make that change. Biden offers that background and perspective. His insider advantage  and his shared vision for change with Obama actually increases the chances for those ideas for change to come to fruition.

Obama is his own person and is a great communicator.  Biden has different abilities and will not overshadow him. Biden offers a great partnership and in practical terms he also brings votes to the ticket.

It is now time for the party to unite and to focus on beating McCain. The political contest is heating up more and this is going to be a real fight.  Remember,  what the last 8 years have been like in our country.  Do we want more of that as Americans or not?   You decide. Get involved. Vote!