East Side Story (2006) – Coming Out in Latino Los Angeles

East Side Story (2006) is a film that was co-written by Carlos Portugal and Charo Toledo. Portugal also was the director.  The film is a comedy that tackles heavy topics like coming out as a gay man in a Latino community in Los Angeles, the gentrification of ethic neighborhoods and racism within the gay community.

The comedy in the film has an “Ugly Betty” flavor to it and has some good performances turned in especially by handsome Rene Alvarado who plays Diego Campos and Gladys Jimenez who plays Diego’s young aunt, Bianca Campos.  Alvarado is able to capture the vulnerability of a young gay Latino man in conflict with both his Latin culture and the prevailing American culture.

His grandmother wants him to take over the family restaurant business in the neighborhood. All he wants to do is escape to Phoenix and start his own restaurant eventually, and live openly as a gay man.  He has been carrying on a torrid and hot affair with a very closeted highly, successful and visible Latino male realtor on the down low name Pablo (played by David Beron). Of course, Diego wants it to progress and Pablo wants only to get married to a woman. That woman is Diego’s aunt, Bianca.  That’s when the fun really begins!

Bianca is played with such dysfunctional perfection by Jimenez. She provides a lot of the comic relief throughout the whole film.  She also is the one who sees Diego honestly for who he is and accepts him as a gay man.

Well, the plot includes how homophobia affects the family business; how gentrification starts to transform the neighborhood; the complications of Diego’s involvement with a white gay neighbor who is partnered; and of course racism.  Believe me, it is a comedy!  One of the funniest scenes is when the homophobic cook (played by Luis Accinelli) dies of a heart attack in the kitchen in the throes of spewing anti queer hate talk!  Really…it was funny. Really. 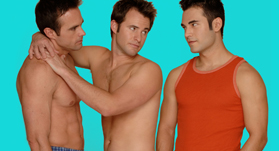 The film navigates through most of the topics well and is only hampered by some weak acting on the anglo side of the equation.  Cory Schneider, who plays, Jimmy, the bigoted, next door gay neighbor boyfriend of Wesley (who has fallen for Diego) is so irritating and his acting is so uneven that he became a weak protagonist. Steve Callahan’s Wesley was also rather flat and one dimensional.  Besides his great looks, you are left wondering why Diego would fall for someone like Wesley for a long term relationship beyond having a quick romp with him in the hay.

Overall,  East Side Story is definitely a DVD to rent and watch.