Likety  anyone else,  I have over the years,  indulged in guilty pleasure television like Dynasty, Melrose Place, the O.C., etc.   This year I started watching Gossip Girl and thought its “Cruel Intentions” premise was promising augmented by its beautiful cast. 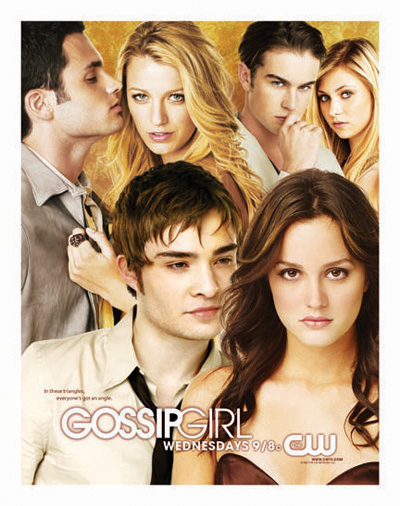 However, with every episode the mean factor and absurdity of its plot lines have made all of its characters unlikable and, frankly, unwatchable.  There is no originality to the story lines. They are simply repackaged.  If it weren’t for the great fashion and good looking cast, this show would have died sooner. It is surviving on celebrity power or teen idol power.   Of course, you can turn the sound off and just look at all the handsome and beautiful faces. But why waste time.

I mean these story lines must have been written, as my friends in the Castro would put it, “by some bitter Queen who still is seeking revenge on everyone who spat on her tiara in high school!”

If you really want to invest in some guilty pleasure television, check out the new 90210 on the CW or BBC America’s Skins. Those are much more better offerings. Unlike  Gossip Girl, you won’t feel like heaving out your dinner after an episode.