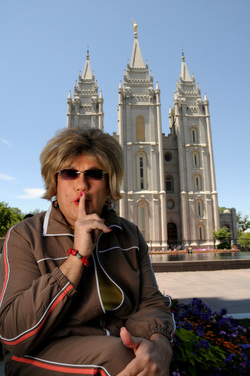 Who is Sister Dottie S. Dixon?

• Past President of the Spanish Fork PFLAG

• Life Member of the DUP (Daughters of the Utah Pioneers)

• Advocate & Watch Dog for the oppressed and downtrodden

Listen to Dottie live Wednesdays at 1pm on KRCL 90.9 FM or streamed at KRCL.org

One of her lastest posts (and podcasts) is on the Church of Jesus Chirst of Latter Day Saints’ ( Mormon Church) political and monetary campaign in support of Proposition 8 in California to ban Same Sex Marriage. The church is marshaling its nearly 3/4 of a million members in the state as well as its millions of out of state members to contribute, to blog,  and to support the measure in any way they can do it. It is one of the most outright blatant moves of organized religion in the United States to influence public policy.

Sister Dottie expresses her disgust as shown in a copy of her post below.

Isn’t it just so sad to see so many Latter-day Saints enlisted in the cause of hate?  You just can’t talk any sense into some of ’em either!  All this business in California with that Proposition 8 has my heart close to breakin’.  My very own Church is investing millions to keep people like my son Donny from marrying the love of their lives.  And they contend it’s God’s will.  And I’ve been receiving letters from listeners who tell me they want to leave the Church because they’re so riled up.  Well I say if your gay — get the hell out!  But if your straight, stay in Church and dish out some hell!

Sometimes Church members will tellya that contention is of the devil.  Well tell that to Martin Luther King!  If he would’ve believed that, 600 S in SLC would be named Jim Crow Blvd and blacks would STILL have to use the servants entrance of the Joseph Smith Building!  Lands!

Conference weekend useta fill my heart with love.  But now to hear all the Brethren get up and tell the Saints to live within their means, while they are turning around and building all them new temples — Crimenently!  It makes my head dizzy just trying to make sense of it all.

But I diverge.  I’d like to encourage all my fans to check out Mormons for Marriage.  They’se a group of active Mormons in California who have been working to be all Christ-like on the gay issue.  When I see how brave they all are, it reminds me of why I’m just so proud to be a Latter-day Saint.  And I aint gonna let a few homophobic apostles keep me from the Church and people I love!  And that especially includes my gay son Donny!  Families.  Isn’t about damn time?  Anywhoo, I hope you enjoy this week’s podcast.  And for all you LDS faithful who are taking a stand for all the voiceless gays — I’m proud to be numbered among you!