Mormon Dollars Account for 77% of Yes On Prop 8 Campaign 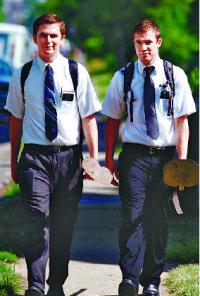 Inlookout.com had the following post on the Mormon Church’s financing of the Yes on Proposition 8 Campaign to Ban Gay Marriage.

Yesterday I posted a story about a family in San Jose who donated $30,000 — correction, over $60,000 total — to support Yes on Proposition 8. I hesitate to make this a daily Mormon rant, but here goes.

Fred Kager, who runs the Californians Against Hate website which provides a detailed (and publicly available) list of contributers who support Proposition 8, revealed today that Mormons have donated a staggering 18.6 million to deny same-sex couples the right to marry. That’s 77% of all total documented donations. Mormons also account for 88% of all individual money raised.

Mormons, instructed by their leaders in Salt Lake City Utah, are leading the charge to take away the rights of same-sex couples, both here in California and Arizona.

How do we fight this? How do we shed light on this, without looking religiously intolerant? At this point, do I really f*@cking care?

It also astounds me that the campaign to defeat Proposition 8 only has only amassed 30,000 donors out of an estimated 1 million LGBT Californians. And many of them are our straight allies.

Is marriage just not that important to our community? Don’t they realize that if we let them strip away this one right, it gives them license to strip away all the rights we’ve worked so hard for and now enjoy? (at least here in California)

I’m angry with the Mormon church for muscling their way into California politics in an attempt to steal away our rights and invalidate my marriage to my partner of 8 years. And I am angry with the members of my community, who won’t stand up to them.

Everyone needs to donate time, or donate money today. Put down the cosmopolitan. Skip the gym at least for a day. Reschedule that facial (lord knows I’ve done all of these things). And please make a difference.

Getting married may not matter to you now my LGBT friends, but trust me, it will.