A Hook-up, Junior, and A Straight Man in A Gay Bar- Oh My! 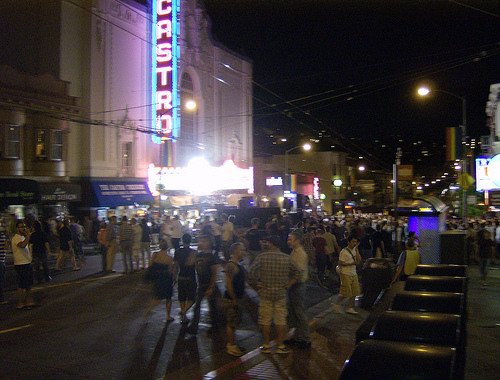 Gary was busy getting some errands done for his job in the early evening. So while he was doing that, I was going to spend some time out in the Castro with one of my very good friends who I will call Jonny.  I thought I was just going to have another enjoyable weekend evening.

Jonny is a great guy and we have a lot of fun when we go out. He is also single and on this particular night he had that look in his eyes. I call it the Hook-Up look. It is the look that I see in both my gay or straight male friends occasionally when they are on the prowl for some booty. Guys, you know what I am talking about. I was prepared for a very short evening with Jonny thinking he would meet someone and leave the scene for the night.  In the meanwhile, it was fun watching him do the dance with the men he was meeting.

Jonny was interested in a couple of guys at a dance bar called Badlands, but one guy was persistent and outgoing. He was a tall, dark guy we will call Haji. They started chatting and it looked like they were definitely getting along. Well this guy had a young friend, that for the purposes of this article, I will name him Junior.

Well, Haji and Jonny decided that all four of us should go to another bar called the Mix and sit out on the patio.  While the two of them got to know each other more, Junior sat down beside me and started talking.  Well, he basically started telling me his life story (Yep, it was going to be one of those nights). Junior was only 26 years old and he told me he was in a relationship with a 51 year old man. He told me he was rethinking that relationship. He also told me lots of other things that basically let me know that he was a very unhappy, young guy.

Junior was also very drunk and getting more obnoxious by the minute.

Well, we finally got up to leave that place and Junior needed the restroom. Of course, when he went there, who would appear but Jonny’s ex who caused a little drama — and Junior was in the middle of it. The ex shouted out something embarrassing about Jonny of a sexual nature and then left. It was actually quite a funny scene. I started looking around for cameras because I thought I was part of a reality TV program and did not know it.

Well, we ended up at another bar called the 440.  This one was crowded and somehow Junior and I got separated from Jonny and Haji.  This is when the excitement really started. Junior was accosting everyone in the bar. Of course all the guys were responding to him. Junior was good looking and had that smile. However, when he started mouthing off at them with all kinds of expletives, their mood towards him changed for the worse. One guy almost knocked him down. At that moment I just wanted to leave him there.  I couldn’t do it. He was so drunk and out of his mind, I was sure he was going to get beat up or worse. I had to get him back to Haji.

Well, I text messaged Jonny and he replied that they were not in that bar any more but were down around Market and 16th Street.  I grabbed Junior and we left 440.  We made our way down to the designated location while Junior was being belligerent to the people walking pass us.  What a nightmare!

When we arrived at the spot Jonny told me they were at and… they were not there!  I called him. They were at the Beck’s Motor Lodge.  That sleazy dump!  I have never been there and here I was dragging Junior to it.   We got to the room they checked into and the first thing I did was used the restroom.  When I was done, I came out and was greeted by the horrific 70’s or something like it looking décor of the place.

There was Jonny, Haji and Junior all lying down on the bed.  Junior was like a 2 year old jumping up and down and being a dork.  I could see Jonny looking at me silently pleading for me to do something.  Crap!  I called out to Junior and told him to follow me out of the room.   He did.  The things I do for my friends.

Junior was thirsty so we decided to go up the street to get some water.  Junior walked straight up to the bar called the Lookout. Thankfully it was late enough and hardly anyone was there. Instead of ordering water Junior ordered a cocktail.

We went out to the balcony area. Junior did try to accost the few guests that were out there.  However, he settled down a little.  This one guy started talking to me.  He was straight.  I asked him what he is doing in a gay bar.

He explained that earlier he met three HOT (as he puts it) Vietnamese young women who took him to a restaurant in the Castro area.  Then they went to another place to get a drink.  He then got up to use the restroom and when he came back to the women, they were gone.  He said he did not think they ditched him (I silently thought, “Oh yeah, brother, they so ditched you!”) He remembered that they said that they were planning to go to the Lookout so that is why he ended up here.

He said he met a straight girl earlier in the bar who was hanging out with her gay best friend.  However, she left already. Apparently, her boyfriend was also there.  Oops!  So the straight guy started telling me his life story (Yep, here it goes again…I must remind people of Dr. Phil or Oprah).  Actually, it was a nice diversion from the craziness of earlier in the evening. He even bonded with me more when he found out that I actually came out of a marriage.  So here I was in a gay bar in the Castro District in San Francisco talking to a straight man about hot women. Okay, what reality TV show is this?

That was it.  We had been at the Lookout for nearly two hours.  I decided to finally drop Junior off at the motel. Haji and Jonny will have to deal with him.  I already missed the last BART train home. I called Gary and he was coming to get me.  He was not happy about it, too.

As we left the Lookout, Junior was trying to take his beer out with him to the street and the bartender stopped him.  Of course Junior had to be obnoxious.  At that point I felt like punching Junior’s lights out. Thankfully, he complied with the bartender.

We made it back to Motel “Sleaze” Beck.  There was a “Do Not Disturb” sign on the door of their room. Junior knocked and no one answered.

Oh no!  They probably fell asleep after sex (I know, typical men, huh?).  I started calling Jonny on his cell phone.  He finally answered.  He opened the door in his half naked, sleepy state (I wished I took a picture, it would make great blackmail ammunition) and took Junior into the room.

Gary picked me up later outside Moby Dick’s (his favorite bar).  He was miffed about the situation but he was more concerned that I was alright.  I was tired.

We made it home and I was so glad to be in my own place. There’s no place like home. The trip to OZ tonight was a little too much for me.  It was wild, however, and the adventure did make me feel strangely alive again, in a way that I have not felt in years.

Oh by the way, Jonny, you owe me big time!