One of the best traditions growing up on the island of Guam (except for the effect on your waistline) is the village fiesta. Predominantly, Roman Catholic, every village in Guam has a patron saint. Almost every weekend on Guam, there is some celebration in a village of a patron saint that includes the religious services but also the associated festivities. 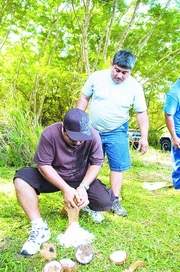 Coconut husking: Ray Flores gets himself ready to take over his partner John Chargualaf, in front, as they finish up first in the coconut husking and grinding competition. (Jonathan Abella/For Southern Weekly)

Among those include the tradition of people opening their homes to the public and serving on several buffet tables traditional Chamorro and other adopted cultural foods. No invitation is needed. Nowadays, especially in the smaller villages, there may be fairs held with entertainment, booths and even carnivals. Often along with the traditional Catholic processions there may even be parades.

What is important about these events is really the linking together of communities and families.This was the way I was tutored about who my relatives were in different areas of the island and also about my heritage. There is certain strength about gathering together often in celebration. The fiesta with its religious theme was simply a backdrop to the more powerful bond of what it means to be of Chamorro lineage. It was our tribal meeting of sorts.

My mother, Joyce Martratt, lives in the village of Molojloj on Guam. She is active in her parish. The patron saint of the village is San Isidro — the patron of farmers, peasants, day laborers and rural communities. For Guam standards, Molojloj is very much a sleepy little rural village. I did not grow up there. Mom moved there after she remarried after my father’s death. Most of us (her children) were already adults at the time she moved there. 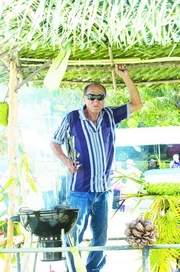 She literally started her second life in this village and has been heavily involved in the catechism programs and choir group at the church. My mother is a woman of faith and is one of those rare souls who actually practices her beliefs. She is also a mover and shaker and is fearless in advocating what she believes is right. My brother Tim compares her to the character that Sally Fields plays in Brothers and Sisters on TV. In fact our family is kind of like that family. We are all pretty much independent thinkers because of her, and sometimes to her chagrin. She has taken her causes even up to the Archbishop, with unabashedness, if she feels something wrong has been done. She will call out the church leadership, if needed. Thank goodness burning at the stake has been outlawed.

During this fiesta, her efforts have been recognized where she has been honored as Grand Marshall of her village. I have included the article from the Pacific Daily News below. I am glad her fellow villagers and parishoners have bestowed this wonderful honor on her. I wish they knew the countless hours my mother has put her heart and soul on behalf of them. She loves them… and she loves her God and Church.

To me she is as close to any saint ever written about and I have the great privilege with my four siblings to be able to call her mom. Molojloj and Guam are so lucky to have her also.

Hundreds gathered in the Southern village of Inarajan last weekend to take part in one of the island’s largest and most popular celebrations — the Malojloj fiesta.

The fiesta is in honor of Malojloj’s patron saint, San Isidro — the patron of farmers, peasants, day laborers and rural communities.

Attendees enjoyed three days of games, contests entertainment, a parade and of course the Mass and procession services.

Much of the proceeds gathered during the three-day event — including $18,000 raised during the 2009 La Raina Coronation Ceremony and another $500 from the sale of fiesta celebration program — will go toward replacing the tin roof of the San Isidro Catholic Church, says Joyce I. Martratt, chairwoman for the event’s Publicity and Program Booklet.

Martratt says the committee hasn’t yet tabulated other proceeds raised from the fiesta.

The Raise the Roof coalition has made efforts to raise roughly $300,000 that is needed to replace the rusted tin roof on the church with a steel roof, Martratt says.

The coalition will have other fundraising events in the coming the months.