Memorial Day draws me to the shores of my birthplace Guam where the blood of brave souls have soaked its soil, unfortunately more times than you would think, throughout its history.

I go back several centuries to the colonial incursion of the Spanish whose methods were forceful and violent.  The native Chamorros of Guam warred against them for years.  However, the superior weaponry and the imported diseases of the Europeans were too much for those brave warriors.  They were literally annihilated by Spain.

It is interesting that those early soldiers of the native people are still not honored officially for their bravery.  The western bias of history has painted them almost into oblivion.  If it were not for the resiliency of the Chamorro culture, they would have been completely forgotten. Today, I honor my great-grandfather ancestors of long ago who taught me that fighting for one’s culture and home is worth the sacrifice.

During WWII Guam was taken over by the Japanese, as a territory of the United States.  Caught between two superpowers, the people of Guam suffered untold hardships during the occupation, being treated less than human by a captor, who believed they were descendants of their Sun God.

Hundreds of U.S. soldiers and Japanese soldiers lost their lives in the battles that ensued in the island’s recapture. Monuments and remnants of that war are found throughout the island. Every Chamorro family has a story of death or extreme hardship from the occupation that is now part of the legacy of their lives.

With the large military presence on Guam, most of the nation’s wars have touched the island in one way or another.  Many of the dead have passed through Guam on the way to their families back home.  Vietnam refugees were processed through Guam in huge tent cities before being dispersed elsewhere.  Today, troops to Iraq and Afghanistan also stop through on the way to their assignments.

Many Chamorros serve in the military, and consequently, a high proportion of them, have given their lives for their country.  Today I honor them. They are my cousins.  They are my people. They are my blood.

The Chamorros still live under the flag of another nation and have never been able to vote on their own self determination. That is still the quest of my people.  Perhaps one day the blood that has been shed over millennia will be considered enough for the right to be allowed that vote.

Have a memorable Memorial Day. 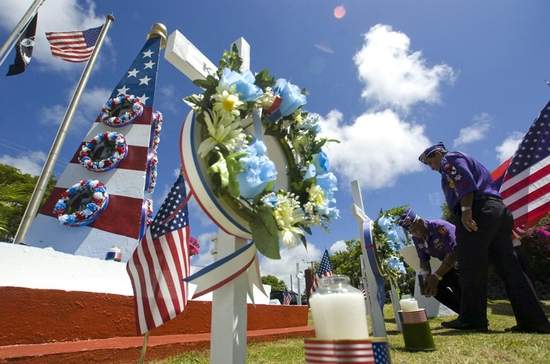 Tribute: Members of the Vietnam Veterans of America Guam-Chapter offer a wreath and candle during a tribute service at the Talofofo Veterans Memorial Monument on Saturday. (Jacqueline Hernandez/Pacific Daily News/jhernande7)