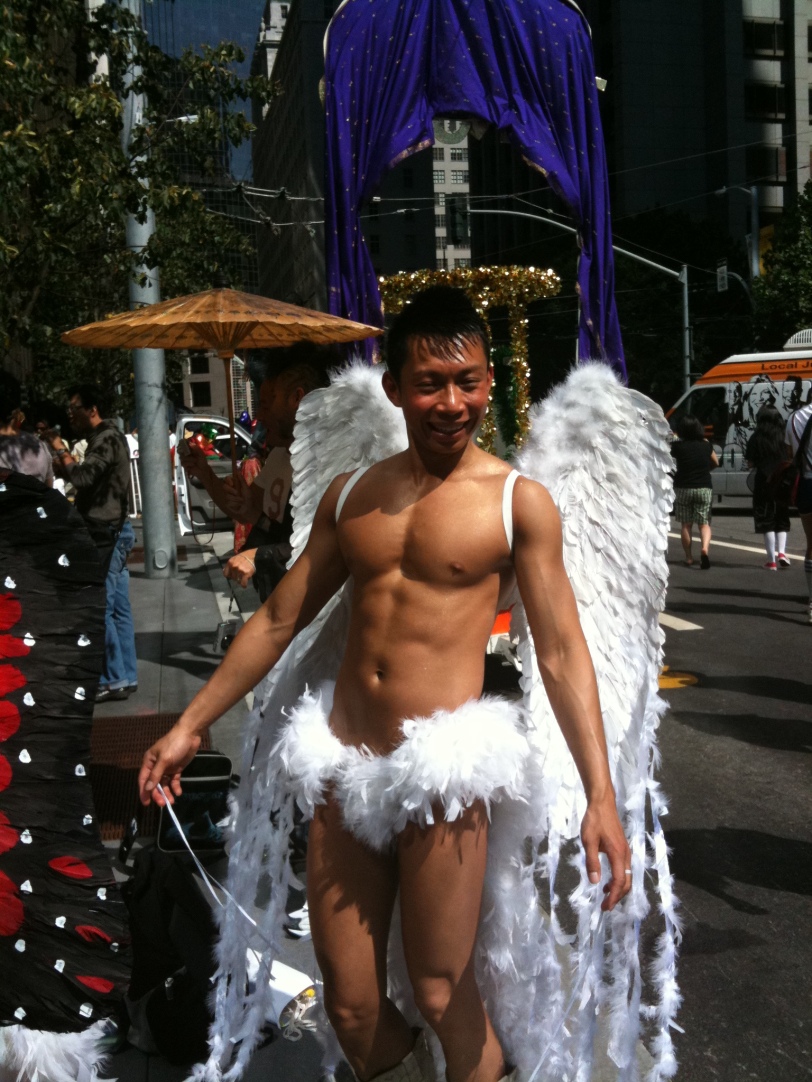 The weather cooperated so despite a comment I overheard on the BART on my way to the Pride parade from a woman who said, “ My sister told me that she would not want to be in San Francisco today if Jesus decided to have his Second Coming today, it will be like what happened to Sodom and Gomorrah!”

Well, apparently Jesus decided instead to enjoy the parade and sent some beautiful weather our way.

This was the first Pride parade I ever actually walked in and it was one of the best moments of my life. I walked with the Betty’s List contingent which included a fire breathing “Snail car”, a couple of dykes on bikes, a convertible and a big truck. There was a man on big walking sticks also. I wore a bright yellow shirt, red shorts, and Van sneakers, with paper snail antennas on my head. I passed out candy with CFO Rick labels, stickers and samples of lube called “Quit Using Spit.” I was also promoting the film of my good friend, Tony Wilkins called “Mo Diaries.” I had the time of my life.

It was a celebration of sorts for me. My coming out process from a sequestered Catholic boy on Guam to now marching down the most famous Pride parade in the world was a powerful exclamation point in my life. I was totally out. I was totally myself and I f**ing did not care if the whole world knew it. It was liberating.

One of the great movie moments of the parade was to hear my life partner, Gary, called my name and I was able to go to the sidelines and hug him and give him a big full on kiss. People clapped and as they should damn it!

Another tender moment was when at one point in the parade, a bunch of my friends, from the sidelines, lovingly called me at the top of their lungs, “JP, you whore and slut!” Ah, friends, how much do you love them!

The crowds were large and so deep. I just remember seeing the hundreds and thousands of faces. I saw gays and straights standing together celebrating diversity, and this year both fighting for equal rights for all people no matter their sexual orientation.

This weekend included the festival down at the civic center and the celebrations on Pink Saturday. There are photos from all of these days here. I actually did not take many photos so the first set is mine. I will add a second set from friends as soon as I get those pictures together. Happy Pride!

From Friends and Others