Annie Lennox and the SING Campaign

On December 1, 2007 Annie Lennox launched the SING Campaign as a voice for women and children who are afflicted with the HIV AIDS pandemic.  The campaign marked its 2nd anniversary a little over a month ago.  Calling AIDS , a genocide in Africa, with women and children its major victim, SING has been marshaling forces and funds to find a cure, better education and health care in this most devastated continent that has been ravaged by the disease.

Over 22 million people in Sub Sahara Africa are HIV Positive.  Again, most are women and children. 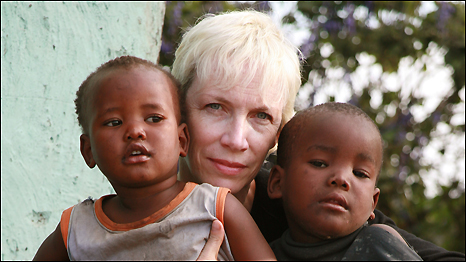 “”WHY IS IT CALLED SING?

The stigma of HIV is so high that people are afraid to talk openly about the issue, or  is close their status. South Africa has a tradition of activist songs and singing, as a way to create solidarity and communicate messages.

When people get together to sing, they become encouraged and inspired. In the words of Nelson Mandela: “Let us use the universal language of music, to sing out our message around the world.”

As one of the world’s most renowned singer songwriters, Annie Lennox decided to write an anthem that could be used as a symbol of unity and empowerment, and help spread the message to the world.

In the spring of 2007, she invited 23 of the most internationally acclaimed female artists to record their voices on “SING”. The recording incorporates the South African activist song, JIKELELE, which means global treatment. JIKELELE was written and recorded by The Generics, who are all members of the Treatment Action Campaign (TAC), the main beneficiary of SING funds. JIKELE calls for the implementation of the Prevention of Mother-to-Child Transmission programme across South Africa.”

There are various ways to get involved.  Click here to find out how:  Get involve with SING.

3 thoughts on “Annie Lennox and the SING Campaign”