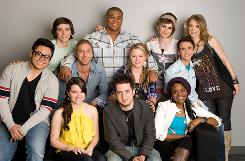 The top 11: The American Idol hopefuls performed on Tuesday night. On Wednesday, one of them will be eliminated.

Okay, I have been a fan of this show from the very beginning but I have to to say that after watching the Top 11 perform tonight, this is the worst season I have ever seen in terms of contestants. There is less star power and talent on the Idol stage at this point of the competition than I have ever seen before.

I mean the best part of the show was Ellen and she has her own show.  I mean they do have talented contestants like Crystal Bowersox, Michael Lynche and Siobhan Magnus.   The rest of them are just boring.

I just cannot believe that out of the tens of thousands of contestants that this is the best of the talent pool they found.  American Idol has become one big Karaoke Bar.

No wonder Simon Cowell  announced this is his last season with the show.