Inspired by The Choir 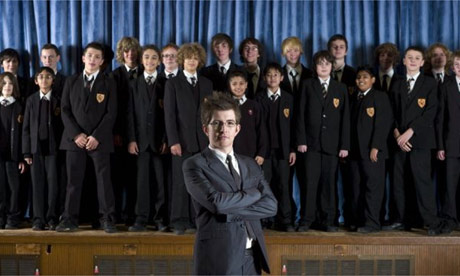 In the Reality TV genre that is saturated with the salacious and titillating shenanigans of the lowest lot of human behavior, I took advantage of my Comcast On Demand   feature and caught up on TV episodes.

One BBC America show that hooked me was The Choir.  It follows the efforts of Choir Master, Gareth Malone, as he goes to schools and different communities who are drastically in need of some choir music program and works to start one. He enters situations which seem like impossible odds and we see the process he goes through to turn them around.

On the surface it seems like it may be a very dull show.  However,  mostly because of Gareth’s commitment , personality and hard work the show is not only riveting but one of the most moving, positive television dramas on TV.

The show airs almost 2 years later in the United States from it’s original air date in Great Britain.  I watch the episodes where he went into the Lancaster School,  an all boys school which emphasizes sports to introduce a choir program there.  I was absolutely enthralled by the stories and the lives of these boys, their families and this Choir Master as he took the newly formed Choir to the level of performing at the Royal Albert Hall in less than a year.

I was inspired and surprised that TV, especially Reality TV,   actually provided me with something that was substantive, life affirming and forever believing that we each can make a difference.

2 thoughts on “Inspired by The Choir”