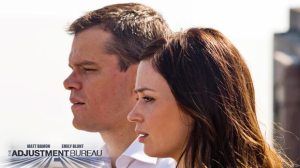 Matt Damon and Emily Blunt in The Adjustment Bureau

I was surprised and then won over by the Adjustment Bureau with its deep themes about our existence, free will and fate.  It was not so heavy handed as to have sent me to nap time but contained enough intrigue and thrills that it kept me alert.  There have been variations on this theme that have been done before on screen.

The freshness of this script comes from the powerful chemistry and storyline of  the characters played by Matt Damon and Emily Blunt.  These two sizzle on the big screen and are believable as two lovers that just can’t be kept apart no matter how much the powers at be say they are not meant to be together.   Their interplay is a living testament on the power of love even to challenge fate.  What is wonderful about the film is that it is not done in a sappy way.  There is this very epic feel  and challenge to the gods drama that ensues throughout it all.

There are times when the excitement feels like those chase scenes in a classic spy drama.  The film at its core is great mostly because of the the two lovers that fight against the greatest odds and take the greatest risks.  They believed their love was worth it all.