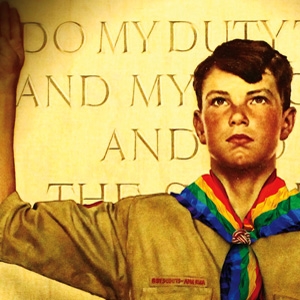 Today,  the Boy Scouts of America, made a change which has been lauded as a milestone.  They have officially accepted gay scouts.  However, they have kept in their policy that gay adults cannot serve as scout leaders.

Saeed Jones of Buzzfeed put it best by writing this:

“Homophobia is most dangerous when it has a good editor. What makes the BSA’s statement so galling is how it deftly attempts to sidestep the blatant hatred and disdain of gay people packed in between the lines. Instead of sending a clear message that all boys, gay, straight and in-between, should to be embraced as well as introduced to the kinds of role models BSA is in the business of fashioning, the organization’s National Council chose has chosen instead to further the idea that gay adults are pariahs and pedophiles.”  ( Posted May 23, 2013, Saeed Jones , Buzzfeed.com)

The Boy Scouts of America has been under fire for its intolerance towards gays in a country where gay equality is winning in all sectors. Everyone knows that a big reason that the BSA has been slow in acting on changing its policy is that some of its biggest sponsors are The Church of Jesus Christ of Latter Day Saints, some of most right wing conservative protestant churches and religious groups who have traditionally been vocal and against gay rights. There has been a fear about lost of these sponsorships and memberships.

The same homophobic rhetoric has been the undertone as it released ( fired) adult leaders and expelled outed scouts that homosexuality is not the scouting way, not true manhood, not reflective of the scouting oath and values.   Now with the acceptance of gay youth , it sends a message that can even be more harmful.  “If you are are still gay when you become an adult you are not welcome in scouting.”  “Yes, you may have earned that Eagle, but it means nothing when you become an adult because you are gay.”

Talk about a dysfunctional message.

BSA, you are still creating a second class of scouts as long as you exclude gay adult leaders.  There is no integrity and true celebration in your decision today.

The scout oath means nothing as long as this inequality exists.