Most people in the LGBT community and in the general community in San Francisco are unfamiliar with some of the grassroots organizations that have been around for years, raising money , dollar for dollar , for many charities and non-profit organizations.  One such group is the Grand Ducal Council of San Francisco.

Most people who frequent the gay bars see them on the surface as one of those groups that hold those drag shows, often during happy hours, selling jello shots and holding beer busts, and selling raffle tickets for assorted prizes.

For some they are a nuisance to their regular drinking routine.  To others, they represent a  group of eccentric oddballs within our  community, that some who prefer mainstream middle america gay images, would rather have them disappear into our archival past.

Well, thankfully, none of that will happen.  It becomes imperative for us,  whether we like drag or not  understand it, to support these great philanthropic groups who have been the core of our community and who have also been the foot soldiers of our movement for equality.

So this Saturday, September 13th,  residents  of San San Francisco, San Mateo, and Marin Counties are going to vote for the next Grand Duke and Grand Duchess of San Francisco.  The two individuals who will be elected will lead a team of volunteers who will compose their court who will plan and carry out several fundraising events for the coming year that will raise tens of thousands of dollars for charities that help causes that address AIDS, Breast Cancer, Homelessness, Hunger, Equality, Seniors, Health, Bullying, Safety, etc.

There are great, outstanding individuals who make up the list of those running for these key positions. They are all running clean campaigns, amicable and doing them in the spirit of community giving.

I am putting my support behind one of the candidates for Grand Duke of San Francisco, T.J. Wilkinson.  I have been involved with the Ducal Council in both leadership and event fundraising in the past few years and I have also known T.J. for several years now.  Using those perspectives, I believe that he has innately and also has gained through experience those attributes that would make him an effective Grand Duke.

T.J. started his involvement as a volunteer working with Ducal leaders on several events, assisting where he could help. Through those roles he understood first hand how every person involved in an event is important to its success and how each one has something to contribute.

T.J. knew that behind all of this work was the money raised for those who need it most.  I believed that he was inspired by what a person and a group of people could do to help out the most needy in the community. By being a great follower, he learned to be a great leader.

He eventually worked towards and won the title of King of Hearts.  It is a sub committee chairman role, where he, along with a co-chair worked together to plan and executed events to raise funds over a year.  He was successful along with his Queen of Hearts to be one of the most productive King and Queen of Hearts fundraiser titleholders in the court. 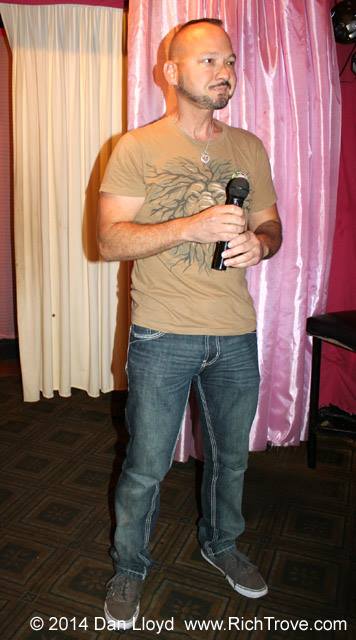 That speaks to leadership, teamwork, organizational skills, commitment and a drive to do the right thing for the right reasons.

These courts are set up with a lot of pomp and formality to encourage tradition and honor, not self- aggrandization.  Similar to fraternal philanthropic organizations, and other groups like the Rotary Club, Elks Club, etc. leadership is a result of community giving output and work.  Any other self-centered purpose is out of line with the Ducal Council mission.

T.J. Wilkinson has also been involved with different parts of the LGBT and general community in which allows him to continue to bring new resources, new awareness and more funding to the charities.  The vision and focus of his campaign has been centered on that very thing.   Every thing that he has learned since that first volunteer duty he took for the ducal council as accumulated and has prepared him for this role. He is ready for it. I believe we are ready for him.

Ultimately, besides leadership, T.J. has always had this great heart and approach-ability.  He never puts on any airs. He mixes well with any segment or group. He’s a collaborator and a facilitator. He gets things done.  When he plays softball,  he plays to win the game but he wants his whole team to win.

He laughs and plays with the best of us, His lip sync performances are getting better and he certainly earns those dollars up on that stage.

But I have seen him tear up when an event  exceeds its fundraising goal, where more dollars can be given to a charity to help those in our community who need it.  It is in those moments that I know there is no one more suited to lead us as our Grand Duke, than T.J. Wilkinson.

ALL VOTERS MUST have a valid ID (CA DL, CA ID, passport, Military ID) showing that they reside in San Mateo, Marin, or San Francisco counties