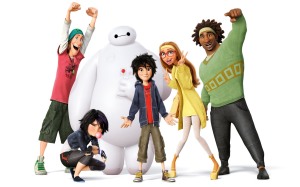 There is something about a good story and some great animation that simply delights one’s screen experience and that is exactly what Big Hero 6 did for me.

Set in a world where the city of San Fransokyo exists and a young genius boy steep programming wizardry lives with his equally talented brother and Cahe shoppe owning aunt. The city is a homage to San Francisco and everything Asian fusion. It also celebrates and looks critically at technology and its ramifications in our life.

Big Hero 6 brings to life a hug-gable dough marshmallow-like robot named Baymax whose sole purpose is to care for the health of the young boy Hiro.   Everyone who sees this movie will want a Baymax of their own.

Tragedy, intrigue, technology go wrong, revenge, family and friendship are all strong themes in this film. There are also neat effects sprinkled with great humor.

Despite its serious tone in some places,the movie is uplifting generally and is filled with laughter, hope and in a real sense joy.   It wins the audience over big time.  A animated classic is born and so are some great superheroes.