Family Themed “The Kids Are Alright” Steals Your Heart

The Kids Are Alright

How appropriate that in an environment where same sex marriage is being debated all throughout the country that a small film about a lesbian couple and their children really brings home the message about family and marriage. 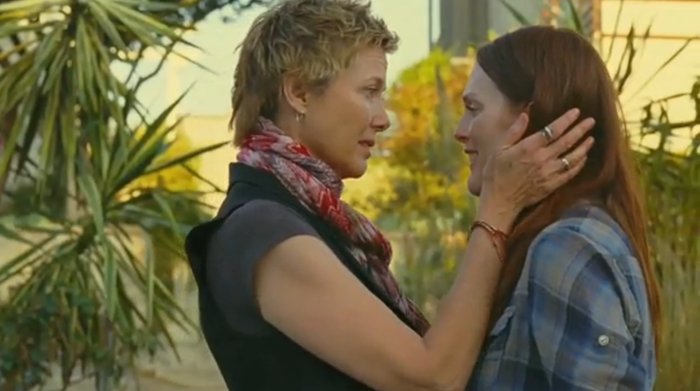 I found that the recently released “The Kids Are Alright” quickly becomes less about a same sex couple raising two children who were conceived by artificial insemination but more about the importance of the family unit despite the challenges that encroach upon it.

This is due in fact to an excellent script, great direction and also top notch acting especially from Julianne Moore, Annette Bening and Mark Ruffalo.   The other key players who play the children bring on strong performers namely, Mia Wasikowska and Josh Hutcherson.

The film could have petered out into a slow moving and dull film but it immediately grabs you with how well it flows with  its universal themes that affect marriage and family.  The curiosity of the children that leads to the search of their biological father and how that all disrupts their lives, and then solidifies it in certain ways, becomes  a living model or at least a reflection for most families.

The layers portrayed beneath the main storyline plot leaves the audience satisfied  with a movie that earns itself  a place as a piece of art deserving recognition in so many different levels.

The weaving in of humor into a story that could have been weighed down with some of the heaviness of the issues actually helped us move through the characters more sympathetically, without reducing the significance of what the family was going through.

Julianne Moore and Annette Bening delivered some of the best performances of their career. Mark Ruffalo was perfectly cast.

If you want to see a movie that will remind you of  what movies are supposed to do, which is to entertain, but also to lift your mind to thoughts and experiences of the human condition.  This is the movie to see.

You will be inspired by movies again.