I Remember —Not To Vote Republican 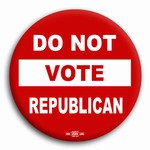 Yes, I am not entirely satisfied with the current Administration’s performance and Congress has some improvement to be made.  However, I remember our country under Republican control.  I will vote against that happening again.

I remember that a lot of the mess we are in was caused by the Republican Party.  The Democrats are culpable for some mistakes but it does not compare to the devastating economic, diplomatic and even social damage the Republican Party’s  failed policies have caused this country.  Republican leadership will set the clock backwards.

We cannot simply vote them back in simply because they are spewing rhetoric to convince us they can clean some messes up.  They were the ones that caused the mess!  We fired them and they should stay fired!

We do need to hold the current Administration and Congress more accountable and drive them for quicker change and improvements.

So tomorrow I am not going to vote Republican.  I Remember…..

One thought on “I Remember —Not To Vote Republican”