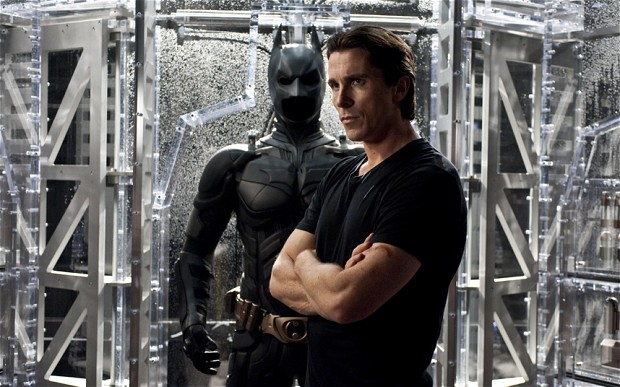 Christian Bale as Batman in Batman the Dark Knight Rises

I finally saw Batman The Dark Knight Rises this last weekend joined by one of my best friends, Andy Padilla. It was his second time.  He felt he could digest the more of the movie this time.  I found out why he felt this way.  The movie was filled , not only with some of the best special effects in the industry but the movie plot was well written and deeply layered with some heavy themes.  I found it to be a very satisfying film with the right mix in the soup bowl of cinematography, acting and script ingredients blending perfectly.

There is not only a theme of redemption that is central to the main character of Bruce Wayne ( Batman played by Christian Bale) but also of humankind wrestling with is own demons of inhumanity, corruption, mass weapons of destruction. The theme runs through most of the characters of the movie.  The main nemesis in the film, Bane ( played by Tom Hardy) is played to draw some empathy ( at least with understanding his journey to explain his current psychotic actions).  Yet each character has flaws and it is only how each uses those flaws to be constructive or destructive that differentiates them.

Anne Hathaway brings a new spin to Cat Woman which may not sit well with everyone but I found it refreshing.  I think it played well to show the character’s struggle between her own sense of self interest and toying with her bouts of heroism when it made sense to her.  This is especially true when it shows her obvious feelings towards Bruce Wayne ( Batman).

The film ends like an epic play resounding with dramatic emphasis with the ultimate hero moment.  Then we are given a glimpse of something better and   a future…and maybe more adventures.

( Note:  I was affected during certain times in the movie with a reminder of the Aurora massacre.  Those whose lost their lives and  who were hurt were present in my mind.  They deserve to be remembered.  I do and will).