I thoroughly am a fan of this James Bond film, Skyfall.  Daniel Craig is a larger than life Bond. 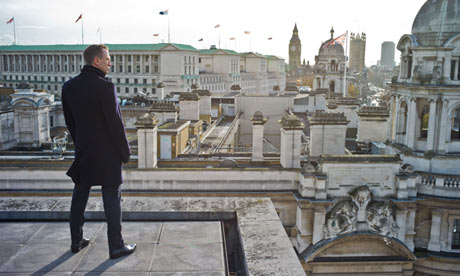 He is my main reason for my liking the film.  He just personifies the Bond character to the tee and in this film which delves deeply into Bond’s personal background, he pulls off a masterful performance.

There is also the performance Javier Bardem as the villain, Silva.  He plays him with maniacal humor that the audience finds him likable.

Mixed into all of this Bond standard action is a story filled of pathos for both the protagonist and antagonist that run some similar threads but with totally different results.

This Bond movie has depth and Craig’s acting chops is able to bring it out while still maintaining the coolness of James Bond.  His physicality in the film plays to both his action scenes as well as to the signature bond love scene. There is even some homoeroticism subtext in one scene between him and Bardem that is classic.

The film is beautifully shot and draws you into such exotic landscapes both externally and internally.  Some of the action scenes and stunts are unparalleled in the industry.

Just a joy of a film to watch.  Make sure to not miss it.

4 thoughts on “Skyfall – The Best Bond Film To Date”