Why Do We March?

This week the United States Supreme Court will hear two cases regarding marriage equality, more specifically for same sex couples.  One case focuses on California’s Prop 8.  That case will start to be heard on Tuesday, March 26th.   The second case will be heard on Wednesday, March 27th and will focus on the constitutionality of DOMA, the Defense of Marriage Act.

Although both cases pertain to the LGBT community, the overarching theme of equality affects all Americans.

Polls show that Americans at large are in more in favor of marriage equality than ever before and more and more states have been adopting it.

In San Francisco , this Monday , March 25th, supporters of marriage equality are asked to join in a march from the Castro to City Hall. Here are the details:

San Francisco’s March4Equality on March 25 is part of an historic nation-wide movement in support of marriage equality and equal protection under the law. As the U.S. Supreme Court hears the Prop 8 & DOMA cases on March 26 and 27, Americans across the United States will be coming out to rally and march in their own towns. Spread the word to your friends across the country: a list of actions can be found at http://lighttojustice.org/

HOW YOU CAN HELP:
1) SHOW UP AND MARCH! The best way to volunteer is to JOIN US on March 25 at 6:30 in the Castro. San Francisco has always taken a leadership role in the fight for equality, so we want to make a powerful statement to the world with a strong showing on the streets of San Francisco.
2) SPREAD THE WORD: Invite your friends and family to join us in SF on March 25 for the rally and march from Castro and Market to City Hall. Share the news on Facebook, Twitter, email, and other social media, and encourage your friends to share through their own social networks.
3) MAKE SIGNS: While we will have some printed signs on hand for the march, nothing makes an impact like homemade signs that express your ideas in your own words. Let’s flood Market Street with our messages!
4) VOLUNTEER: We can use help at the march, particularly with set-up (5:30 p.m. at Castro and Market) and clean-up. For more info email march4equality.volunteer@gmail.com. 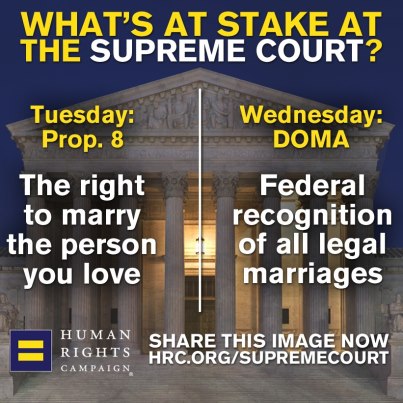 Why do we march?

There is no greater gift then to be equal under the law in a free society.  If any citizen is treated lesser than an other under the law then,  we as a whole citizenry, stand in jeopardy of losing all of our rights. Equal must be equal. There is no compromise.  Marriage Equality is not simply a gay issue, it is an issue about the very core of our constitution and the rights that it guarantees the citizens whose mandate it covers.

In terms of the LGBT community,  this is part of the long journey out of countless closets,   family rejections,  criminal accusations, bullying attacks, job discrimination, societal disdain , and being the throw aways of a bigoted majority.  This march is also a celebration and a solemn recognition of the thousands that have gone before us, who fought discrimination, who died at the hands of bigotry,  who risked life and limb to fight for the causes we are now so close to winning.   This is for the Harvey Milks and the Michael Shepherds who marked the way.   These are for the thousands who passed away too soon and too quickly.  This is for those men and women who served secretly in our armed forces with honor and bravery.

Once equality wins in America for the LGBT community, it will pour into the rest of the world.

We march hand in hand,  Gay, Lesbian, Bi, Trans, Queer, Questioning, Straight ,  all citizens of this great country and this world.   It is about standing up for what is right  and what binds us together. This is not about separation and division . It is about union and the grand one purpose of equality.

There is something sacred about this march.  It represents the hopes and dreams of  generations past, the generation now and all those in the future.

Let’s all march together and make history happen.

One thought on “Why Do We March?”