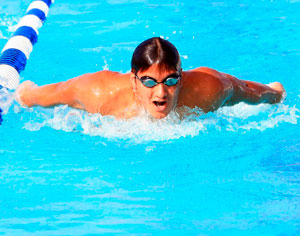 Duenas is competing in the 1oo meter swimming competition. He is one of 60 swimmers who qualified. .  He made the cut with a time of 53.33 seconds. The world record in this event is 46.91.

“After the last Olympics I had to seriously decide whether or not I wanted to try for another Olympics. I made up my mind to give it a shot and it was well worth all the hard work,” he said. “I am looking towards breaking all the previous records I held up to this year, starting with the 100m free here in London,” he said. “This second Olympics will gauge how far I have come in the past four years, and hopefully will give me the push I need to continue to train for the next Olympics and getting further up the world ranking.” – Pacific Daily News

Guam swimmer: Chris Duenas is one of Guam’s athletes traveling to London to compete at the 2012 Olympics. / Jojo Santo Tomas/Pacific Daily News/santotomas@gua

Chris hopes not only to break his own record but to continue efforts to increase the rankings of Guam’s athlete’s that come from a population pool 0f 200,000 in this United States territory.